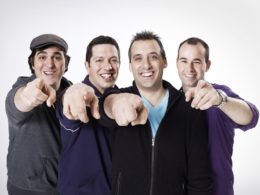 Have Fun, With Manhattan Music Lessons!

What kind of fool are you? This question is intended with all due respect, but we can’t help asking it because tomorrow is the internationally celebrated annual holiday, April’s Fool Day. Even if you are not a buffoon the other 364 days of the year, tomorrow is a good opportunity to act a bit “foolish,” just for the fun of it.

You wouldn’t be the first person on earth to pull a prank or, for that matter, fall victim to one. Even famous people do, so we thought it would be fun to look at some of the music world’s most clever jokers, pranksters, and hoaxers.

Bring in the clowns

Now, you know that humor is a subjective concept, meaning that what some folks think is hilariously funny, others may find in bad taste. We are not endorsing any of these pranks; we are merely letting you know what some musicians had been up to on April Fool’s (and other days) in years past. Are they funny? You be the judge:

These are just three examples, but there are, of course, many more!

At Hey Joe Guitar, we enjoy occasional silliness but when it comes to music education, we are very serious. We know that giving music lessons to people of all ages and levels of proficiency is no laughing matter. That’s why we make sure that a teacher who comes to your Manhattan, Brooklyn, or Riverdale home or office, is a master at his or her art – whether it’s the guitar, violin, or any other instrument.