Brooklyn Music School Will Never Rain on Your Parade! 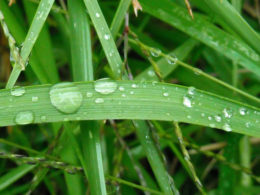 The song that probably best represents the month of April is the “oldie” titled “April Showers.” It was composed in 1921 by American composer Louis Silvers and performed over the years by the likes of Al Jolson, Frank Sinatra , and others.

One of the reasons we like this song is because we appreciate the beauty of rain. You are probably thinking, “what’s so beautiful about the rain? It is wet, it makes puddles, and is not very pleasant.” Fact is that it not only nourishes the nature (as this particular song says, it makes “way for sweet May flowers”), and keeps vegetation fresh and green, but we also like the relaxing sounds it emits as it falls down. (Okay, we concede that listening to rain is much more enjoyable than walking in it!)

We have written about the rain before, but this time we would like to explore the more creative side of this natural phenomenon. A case in point is a building in Dresden, Germany that, literally, is singling in the rain. The house in question is a brightly-colored building that, appropriately enough, is part of an arts project in that city. Here’s how it works: An intricate system of drains and funnels is attached on the outside of the building, and when it rains the entire house becomes an instrument. What kind of “rain music” does it make? Listen to this . Now, if you think all rain is the same, well, it isn’t. It makes different sounds depending on what it hits. This video , (which, by the way, consists of over 1 million drops), proves that. And if you are wondering whether humans can imitate the sound of rain, it turns out they can !

Our lessons will never be rained out!

If you are a rain aficionado (provided such people actually exist) you may like to know that there is actually an ancient Mexican musical instrument called, appropriately, the rain stick. It makes a sound that is reminiscent of they falling rain . Can you “play rain” on more conventional instruments like the guitar or piano? You can certainly try and a teacher of ours will come to your Manhattan, Brooklyn, or Riverdale home or office to give you lessons – even in the rain!

< Previous Post With Manhattan Music Lessons, You’ll Never Feel Foolish Next Post > Does a Music Lesson a Day Keep the Doctor Away? Manhattan Guitar School Gives You the Answer