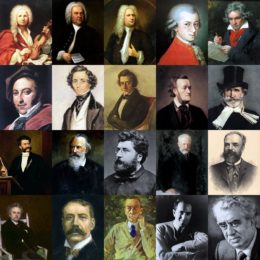 At New York Guitar School, We Love the Classics!

September is stretching out before us and we couldn’t be happier. Why? Because it marks a very important occasion: Classical Music Month, as declared by President Clinton back in 1994. “Classical music is a celebration of artistic excellence,” Clinton noted in his official proclamation. He also emphasized why it is important to pay tribute to this timeless and universal genre: “At the heart of classical music is continuity and tradition. What was heard in a Vienna opera house was heard again in a colonial theater in Charleston, South Carolina, was echoed at the inauguration of President Lincoln, was repeated in turn-of-the-century Chicago, and is played again today by a range of musicians from the most skilled of virtuosos to the youngest student struggling with the complexities of the violin.”

Needless to say, we agree! Even though other types of music have emerged in the past decades, the magnificent sounds of Mozart, Bach, Beethoven, and other noted composers of centuries past are still filling our ears – and hearts – with beautiful sounds.

What exactly is “classical” music? In our Western understanding, it is a genre created by European composers from (roughly) the 16th to 19th centuries. But what many people may not realize is that the term “classical” actually covers three historical periods: the Baroque (1600–1760), Classical (1730–1820), and Romantic (1780–1910). Among the most noted composers working during each of these periods were Bach, Handel, and Vivaldi for the Baroque era; Mozart, Beethoven, and Chopin for the Classical one; and Schubert, Tchaikovsky, Debussy, and Wagner in the Romantic period. As you can see, all the above eras overlap with each other, so there is no clear cut-off point from one to the next (although, as you can imagine, historical, cultural, social, and intellectual contexts had undergone tremendous changes in the four centuries that separate the beginning of the Baroque and the end of the Romantic period). So what are the specificities of each of the above eras, you may wonder? Generally speaking, Baroque music is characterized by its fluidity and flow . Classical pieces tend to be more dramatic , while the Romantic period featured strong contrasts in the rhythm, tonality, and harmony, as well as a larger variety of instruments .

As we mentioned before, a variety of music genres were created in the past century, but classical music never fell out of fashion. Our teachers are classical music aficionados as well, though most are quite versatile in their tastes: they also love jazz, blues, folk, rock, country, and every other kind of music ever invented. What this means is that whichever genre and instrument you are interested in playing, we have an excellent teacher for you. Just contact us and we’ll send him or her right to your Manhattan, Brooklyn, or Riverdale doorstep. Together, you’ll create a beautiful symphony of sound!