The Mating Game: A “Love Child” That Toots Its Own Horn 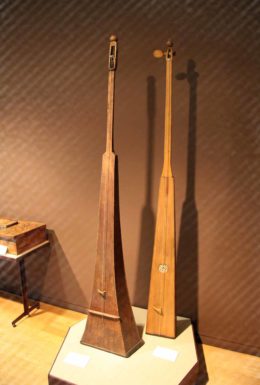 Obviously, musical instruments can’t have children, but just for the sake of an argument imagine that they could reproduce. Have you ever wondered what kind of offspring they’d have?

This, of course, is a purely theoretical (or, if you prefer, hypothetical) question, but genetics work in mysterious ways! We became intrigued by it a couple of months ago when we came across an article with this headline: “This instrument is the musical love-child of a double bass and a trumpet.”

Naturally, we had to read it and we are glad we did. We learned that a rather unusual offspring of a string instrument — double bass – and a trumpet (brass) is called Tromba Marina (“marine trumpet”), and it was popular in medieval and Renaissance Europe. According to the article, this bundle of joy “sounds like literally nothing else we’ve ever heard.”

And it is a handsome little fella (or a lass, we can’t be sure): made of wood, it is long and lanky, narrow at the top and wider at the bottom.

The instrument, which dates back to the 12th century, “has one long, thick playing string which is bowed and a host of resonating strings.”

Old but Not Forgotten!

We learn more about the Tromba Marina’s origins from Clare Salaman, the founder and director of The Society of Strange and Ancient Instruments (more about it a moment).

And speaking of fascinating things, we find The Society of Strange and Ancient Instruments totally awesome.

Just look at some of the many unusual old instruments the Society features:

The Past and Present

It’s important to note here that every “modern” instrument – be it the guitar, piano, violin, flute, etc. – has historical origins of its own.

Instruments that we teach in our school didn’t just appear magically overnight out of nowhere. Someone in centuries past had to either invent them from scratch or take an already existing instrument and modify it to make it sound better.

Not every instrument may be a “love child” in the same way as the Tromba Marina is, but we, for one, love them all!