The Many Sounds and Functions of the Guitar 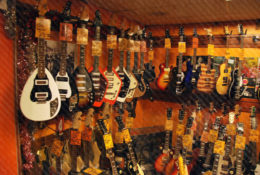 January is a traditional time for New Year Resolutions. Some of them are really far out, while others are totally reasonable and doable.

As a music school, we have many people – adults and children alike – tell us they would love to play an instrument. A lot of them express interest in the guitar. We are, of course, delighted and excited to teach them to play this wonderful string instrument.

But before we match our students with the most amazing teachers in New York City, we ask them what kind of guitar they have in mind. More often than not, they have no idea that there are several types of this instrument to choose from.

By Any Other Name, It’s Still the Guitar!

The so-called “simple” or “classical” style is the kind everyone imagines when thinking of the guitar.

Another well-known type is the electric guitar. The purely technical definition of this instrument, according to Wikipedia is: “a fretted string instrument that uses a pickup to convert the vibration of its strings.” But to put it in simple terms, it gives the rock and roll music its unique tone and character.

What about the acoustic guitar? We are glad you asked! Unlike the electric guitar, which uses electronic amplification, the acoustic type produces sound by transmitting the vibration of the strings to the air.

Now let’s move on to the steel guitar, which is usually positioned horizontally. Its strings are plucked with one hand, while the other hand changes the pitch of its strings with the use of a bar or slide called a “steel”.

Now, you might think that metal guitar is somehow related to its steel cousin, but that’s not the case. As the name suggests, the metal guitar is used by heavy metal and psychedelic rock musicians,

since its sound can be best described as “loud,” and “distorted.”

Next, there is a flamenco guitar, which is similar to the classic model but has a thinner top and less internal bracing. As its name suggests, it is used most commonly in flamenco music.

If you prefer the melodic sounds of the blues, there are several guitars on the market that are great for playing that genre.

What about the rhythm guitar? Actually, it’s more about the guitarist and his (or her) role in the band than the instrument itself. For instance, the rhythm guitar(ist) provides chords and rhythmic references for the vocalist and other players.

This is, of course, a brief description of various guitar types, but if you or your son or daughter are interested in learning more about these instruments, we’ll be happy to oblige!

The guitar has long been one of the most popular instruments. Why? Because the piano is too bulky and heavy to carry on the motorcycle!

We are joking of course! People of all ages choose to play this instrument because it’s so versatile – the types outlined above cover all music genres.

And it is also a great “equalizer”: even though many people imagine guitarists as male, fact is that there are lots of talented women guitar players as well.

All this goes to say that boys AND girls can enjoy and benefit from guitar lessons!

< Previous Post Spice Up the Holidays with New Music Next Post > The Mating Game: A “Love Child” That Toots Its Own Horn