Night at the Museum, With Manhattan Music School 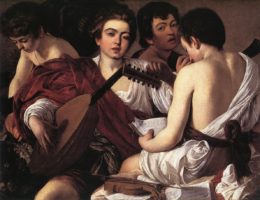 What are your plans for the upcoming weekend? We suggest you spend some time at one of the most amazing New York institutions, the Metropolitan Museum of Art.

Among so many wonderful and varied exhibits is a small one that has caught our attention: entitled “Painting Music in the Age of Caravaggio,” the three artworks – on display until April 5th – portray musical performances depicted by three Baroque artists.

Caravaggio’s “The Musicians” (1595), Valentin de Boulogne’s “The Lute Player” (1626), and Laurent de La Hyre’s “Allegory of Music” (1649) remind us of how different the concerts used to be hundreds of years ago.

For the contemporary audiences, accustomed, as we are, to music that is piped, streamed, and available on demand anytime of day and night, it may be difficult to imagine that until a century ago, music could only be heard live by small groups of (mostly privileged) people.

Music fit for a king

It’s certainly a good thing that symphonies, philharmonics, and all the other kinds of music performances are now widely accessible to people everywhere. But it wasn’t always like this; in fact, for much of the history, “orchestras” and “concert music” consisted of small groups of musicians who played at religious celebrations, festivals, holidays, and similar occasions, using whatever instruments were available to them.

Until the end of the Baroque period, concerts were private affairs – musicians performed for their patrons and sponsors rather than for general public. Even Mozart, whose lifetime spanned the Classical era that followed the Baroque, spent his early years playing for his royal patrons. Interestingly enough, as a teenager, he spent three years traveling throughout Europe and performing at royal courts for various kings, queens, and other nobility. It certainly brings a different meaning to what we now think of as a “concert tour!”

The notion of a modern orchestra that performs in a concert hall for the ticket-paying audience started only at the beginning of the 19th century. As a matter of fact, Beethoven debuted his Symphony No. 1 in C major at the Royal Imperial Theater in Vienna on April 2, 1800.

In those days, the strings gained prominence in a standard orchestra, and the keyboard instruments had become less important. The new trend that had developed during this time was for composers to write music for the specific instrument.

Over time, as orchestras became bigger and encompassed new instruments, many composers started to write specifically for sizable ensembles; some of them, like Wagner, Verdi, and Berlioz, became conductors as well.

And just to think that this trip down the musical memory lane was sparked by three oil paintings hanging at the Met!

As New Yorkers, we are lucky to have so many great orchestras and musical venues. However, keep in mind that, as Jack Benny famously noted, the only way to get to Carnegie Hall (as a performer, not a spectator), is to practice, practice, and practice!

We can certainly help you with that. Whatever musical instrument you have your heart set on – guitar, violin, cello, or any other – we’ll match you with a terrific teacher. He or she will come to your Manhattan, Brooklyn or Riverdale home or office to give you Carnegie-worthy lessons!