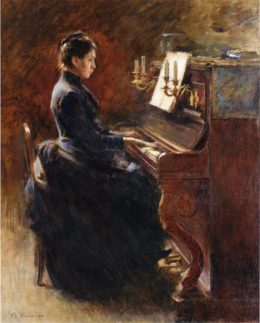 Did you know that March marks the International Women’s Month, not only in this country, but also all over the world?

There are numerous reasons to honor women past and present, because they have made significant contributions to arts, humanities, sciences, politics, as well as many other areas. And not just the famous ones, mind you, but also the so-called “unsung heroines” who, through their efforts and dedication, have made a meaningful impact on our lives.

We at Hey Joe Guitar would like to celebrate the women of the world by honoring female composers. Yes, you heard it right – FEMALE COMPOSERS. If you think that composition is strictly a man’s domain, prepare to be surprised!

Out of the shadows

We know that there are many women songwriters, but, throughout the centuries, there had also been women composers of classical music. They are not as well known as their male counterparts (historically, women always had to struggle for recognition),
but their contributions to music have been remarkable.

Obviously, we can’t list all of them here, but we are pleased to introduce you to several who had composed beautiful pieces of music that remain largely unknown. We think this is a great opportunity to present some of these gifted women who have lived in the shadow of male composers far too long.

The names Mendelsshon and Schumann are familiar to music lovers, but we are not talking about Felix and Robert, respectively. Rather, we are referring to Felix’s sister Fanny and Robert’s wife Clara.

Let’s start with Fanny (1805-1847). Although she showed musical aptitude from an early age, she did not get as much encouragement and support as her brother did. In fact, in an 1820 letter to her, Fanny’s father wrote: “Music will perhaps become his [i.e. Felix’s] profession, while for you it can and must be only an ornament.”

In her short life (she died at 42 from a stroke), Fanny composed 460 pieces of music, many of which were published under Felix’s name. To those who had an opportunity to hear her work , there’s no doubt that Fanny was a talented composer in her own right.

What about Clara Schumann (1819 – 1896)? A child prodigy who performed recitals around Europe from an early age, Clara’s deftness at the piano won her an admiration of composers like Frederic Chopin and Niccolo Paganini, among others. Her most fervent admirer, however, was a man who would become her husband, Robert Schumann.

While Clara was a successful pianist, she was not widely recognized as a composer, even though she composed a number of piano concertos and other pieces of music . As she once explained, “Composing gives me great pleasure… there is nothing that surpasses the joy of creation, if only because through it one wins hours of self-forgetfulness, when one lives in a world of sound.”

However, since Clara never received any popular acclaim for her works (even though her husband was supportive), she eventually gave up composing. “I once believed that I possessed creative talent, but I have given up this idea,” she said. “A woman must not desire to compose—there has never yet been one able to do it. Should I expect to be the one?”

Sadly, Clara’s music, like that of so many other women composers of her time, had never been taken seriously.

Of course there had been many other women composers throughout history, and most of them had no family ties to male musicians. Marianne Martinez and Louise Farrenc were among them.

Marianne (1744 – 1812) frequently performed with Mozart (they were both Austrian) and worked in the shadows of famous male composers of that era. However, she went down in history as the creator of the only symphony written by a woman during the Classical period.

Louise (1804- 1875) was a French composer who wrote music not only for the piano, but for chamber ensembles and orchestras as well.

To know them is to love them

At our NYC music school we are happy to honor women composers, songwriters, and musicians in general – past and present. In fact, we are open to all kinds of music, even to the works that have been little known by general public.

Our excellent teachers will be happy to come to your Manhattan, Brooklyn, or Riverdale home or office and give you or your child music lessons on an instrument of your choice – whatever gender (or age) you are.

< Previous Post Don’t Stop the Music – Our Brooklyn Music Lessons Will Help! Next Post > Night at the Museum, With Manhattan Music School