Breathe New Life Into Your Recorder 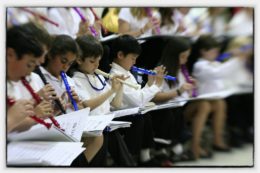 Here’s a question for you: When is a flute not a flute?

The answer:  When it is a recorder!

True, to an untrained eye, the two instruments may look a lot alike and, in fact, they do have common roots – the recorder was a forerunner of the modern-day flute.

Although its heyday can be traced back to the late Renaissance and Baroque years (which is why Bach, Vivaldi, Handel and many other composers of that era featured the recorder in their music), it remains, to this day, a popular instrument with NYC Music School amateurs and professionals alike.  Bruce Springsteen, Paul McCartney, and Billy Joel are among the world-famous musicians who play the recorder.

If you like soft and melodious sounds more suited to a chamber orchestra or a solo performance than to a rock band, and if you are looking for an instrument that is relatively inexpensive and easy to learn, then the recorder may very well be a great fit for you. (And yes, we can definitely teach you to play it in your New York City office or home – but more about that later).

Whistling in the wind

You guessed it – the recorder is a woodwind instrument that features a tin whistle. These days the recorders are most commonly made of wood or plastic, but four or five centuries ago, when preservation of wildlife was not yet a hot-button topic, they were often carved out of ivory.

Though there is some evidence that a primitive version of the recorder (made from a sheep’s bone) existed already in the Iron Age, this instrument evolved, and reached its peak, in the 16th and 17th centuries.

If you listen to the music of that era, such as cantatas, sonatas and operas, you will understand why the recorder (and woodwinds in general, along with the strings) was a popular instrument for the composers of that time.

As larger orchestras started to gain popularity, the recorder, which was not loud enough to play “bigger” and richer sounds like the percussion instruments, was slowly phased out and replaced by the flute and clarinet.

But as it sometimes happens with temporarily forgotten artifacts, the recorder got its second wind (no pun intended) at the beginning of the 20th century, and never fell into oblivion again.

… these interesting facts about the recorder?

“Govern these ventages with your fingers and thumb, give it breath with your mouth,  and it will discourse most eloquent music.”

As we mentioned before, the recorder is an easy instrument to learn for children and adults alike. It might have become obsolete in the past, but one of the great things about living in the 21st century is that you can find inexpensive recorders with no hassle, either in NYC music stores or online (if you are not sure where, just ask us!).

What about finding recorder lessons and music lessons in your neighborhood? We are glad you asked! We at Hey Joe Guitar will be happy come to your Manhattan home or office and teach you.

In no time at all, you will become a great whistleblower!

< Previous Post Manhattan Music Lessons Bring Magic to the Flute Next Post > Chelsea: A Gem of a Neighborhood on the West Side