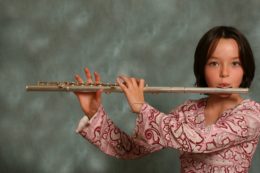 Mozart was not the only one who knew the magic of the flute. With Manhattan music lessons, you can create some beautiful magic of your own!

“When you work, you are a flute through whose heart the whispering of the hours turns to music.”

We don’t know whether the late poet Khalil Gibran played the flute, but he probably listened to it and enjoyed it quite a bit to be able to speak about it so eloquently!

Fact is, the flute as such is not really magical. What makes it so is the combination of the flutist’s mastery and the sounds the instrument produces in his or her capable hands.

Unlike the bold and brash sounds of the drums, flute is, in the words of rock musician Ian Anderson,  “a gentle and sensitive instrument.”

A reedless woodwind instrument, the flute has been around for a very long time. In 1994, European archeologists found a flute that was somewhere between 40,000 to 80,000 years old.

It was hollowed from the bone of a griffon, a large vulture that used to live in southern Europe and northern Africa.

Excavations of archeological sites in ancient China and Egypt also unearthed primitive flutes. These very early instruments were often carved from animal bones or mammoth’s ivory, a far cry from later models made from wood or silver-plated metal.

However, it wasn’t until the Baroque era, during which the flute evolved enough to be integrated into the orchestras, that instrumental ensembles, as well as solo flute concertos, had been written and performed.

Mozart,  Vivaldi,  Haydn, as well as scores of later composers wrote concertos for the flute.

Know your ABCs (as well as Es and Gs)

The early flutes were end-blown, held and played pretty much like the recorder. Similar models are still used today in certain cultures to play folk music. However, the majority of flutes these days are transverse or side-blown, held horizontally when played.

And though these flutes might look the same, there are differences in their pitches: Bass Flute in C, Alto Flute in G, Tenor Flute,

Concert Flute in C, Soprano Flute in E Flat, and Treble Flute in G all sound slightly different. If all this seems complicated to you, it really isn’t. It is certainly easier than quantum physics!

For one, the flute is easy to handle, which is an advantage to anyone who doesn’t fancy toting huge instruments around. Secondly, although it is most commonly associated with classical music, it can also be used in jazz or rock bands. Just ask many famous jazz flutists, or rockers like Ian Anderson, the flutist for the British rock band Jethro Tull or The Genesis’ Peter Gabriel.

Whatever genre of music you want to produce on your flute – even if it’s only to charm a snake – our Manhattan music lessons will help you achieve that.

And even though a flute is light and transportable, you don’t have to do that: We will come to your Manhattan home or office and teach you. With practice, your flute too will have a touch of magic!