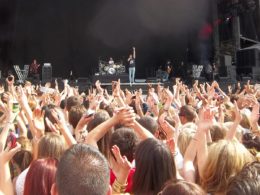 We have said it many times before and we still stand by it: music training is good for you! However, this doesn’t mean that every music experience is always calm and uneventful; sometimes, concerts incite not only applause and calls for an encore, but also utter chaos.

You might think we are talking about women throwing their panties at Elvis Presley so he could wipe his sweaty brow with the undergarments, or teenage girls screaming, swooning, and sometimes even fainting at the Beatles’ concerts. No. We are referring here to real riots, which, surprisingly, occurred at classical music concerts. And some of them happened even in our city! Let’s look at a few of the most famous – or, in this case, infamous – ones that… struck the wrong notes with audiences.

Dissention in the ranks

It is no secret that not everyone is a fan of Richard Wagner, the 19th century German composer known for his somber music. In 1861, at a Paris performance of his opera “Tannhauser,” he placed the ballet sequence in the first act rather than in second, as originally written. Talk about a faux pas! The change outraged purist spectators, who showed their discontent with loud cat-calls, whistles, and general ruckus that disrupted the performance and caused a scandal in Parisian art circles. Half a century later, also in Paris, broken canes and crushed fedoras were not the only victims of a brawl that broke out in May 1913 during the premiere of Igor Stravinsky’s ballet, “The Rite of Spring.” Though now a classic, at that time both the music and choreography were clearly too shocking to audiences accustomed to the elegance and grace of classical ballets. As soon as the performance began, furious spectators started to boo the orchestra and dancers. Their outrage, according to eyewitness reports, was sparked by the sound of the bassoon – described as “strangled” – “fluttering and twittering woodwind sounds,” as well as “pulsating rhythms” that were far too avant-garde for the sensibilities of the early 20th century music patrons. Very soon, fighting erupted and spread throughout the audience. Police were called but were unable to contain the riot; Stravinsky did the only rational thing he could under the circumstances – he fled the scene. Much later, in 1973, a riot of sorts was staged – pun intended – in our own Carnegie Hall. A concert by Boston Symphony featured Mozart and Liszt, which, of course, appealed to the tastes of classical music lovers. However, the musicians also performed Steve Reich’s “Four Organs.” Some of the audience members didn’t dig the repetitive music of this minimalist piece, creating a scene. One elderly woman even removed her shoe and struck the stage with it in protest. As the conductor later said, “We kept going, even though people were having fistfights in the audience.” And there are many more instances of musical riots throughout history.

As the above examples demonstrate, when it comes to music, people’s emotions sometimes run high. We too are very passionate about music, though in a more positive and peaceful way. That’s why when our teachers come to your Manhattan, Brooklyn or Riverdale home or office, they will not run riot. To the contrary, they will always be respectful of your (or your child’s) musical tastes and support your efforts to master your instrument with kindness and patience. Yes, our teachers are definitely pacifists, but when it comes to excellent music education, they will fight the good fight!

< Previous Post With New York Music Lessons, You and Your Instrument are a Good Fit Next Post > Feel the Sea, Sun and Sand, With Brooklyn Music Lessons