Don’t Stop the Music – Our Brooklyn Music Lessons Will Help! 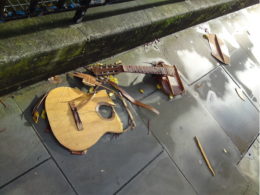 With Brooklyn Music Lessons, The Beat Goes On

We recently came across a very interesting article about books that, at one time or another, had been either censored or banned in the United States.

It turns out that some of the most famous works of American literature were placed on the “no-read” list, among them Mark Twain’s The Adventures of Huckleberry Finn, The Call of the Wild by Jack London, For Whom the Bell Tolls by Ernest Hemingway, and even John Steinbeck’s Pulitzer Prize-winning novel, The Grapes of Wrath.

What about the music? In his famous 1971 song, “American Pie,” Don McLean sang about “the day the music died” .
This was intended to be a tribute to the death, 12 years earlier, of rock & roll icons Buddy Holly, Ritchie Valens, and J. P. “The Big Bopper” Richardson. But, in many instances, some songs of the era did die – figuratively speaking, of course.

The age of innocence

In her song titled “Dance in the Dark” , Lady Gaga urges listeners to “Find your freedom in the music.” Unfortunately, because of their contentious (in some people’s opinion) lyrics, certain songs were seen in their time as provocative enough to be censored.

For instance, in the 1940s, George Formby’s “When I’m Cleaning Windows” was called by the censors “a disgusting little ditty” – and banned from the airwaves in his native Britain – because it portrayed him as a voyeur of sorts:

“The blushing bride she looks divine
The bridegroom he is doing fine
I’d rather have his job than mine
When I’m cleaning windows.”

In the USA, the censors were busy as well. Even though the Everly Brothers were a clean-cut and wholesome duo, their 1957 hit, “Wake Up Little Susie” was banned by radio stations. Why? The censors thought that lyrics about canoodling teenagers (“We fell asleep, our goose is cooked our reputation is shot”) would incite hanky-panky among young people across America.

Teen idol Bobby Darrin was also targeted by the censors’ wrath: his 1958 song, “Splish Splash” was condemned for its “indecent lyrics.” The censors thought America would be shocked by hints of nudity:

“Well… I stepped out the tub
Put my feet on the floor
I wrapped the towel around me
And I opened the door.
And… then-a… splish, splash
I jumped back in the bath
Well… how was I to know
There was a party going on.”

You might think that above-mentioned songs were frowned upon because the moral codes in those days were far stricter than they are today. True, but music continued to be censored well into the second, more liberal, half of the 20th century.

For instance, “Puff the Magic Dragon” by Peter, Paul, and Mary (1962) and “A Day in the Life” by the Beatles (1967), were banned because censors thought they could incite the use of drugs.

And “Let’s Spend the Night Together” by the Rolling Stones (1967) was regarded as purveyor of low morals.

Although, sadly, the teaching of music – and arts programs in general – is banned in certain parts of the world, here in New York City, it is thriving!

We believe – and know as a fact – that music lessons are beneficial for people of all ages and we are honored to be a part of this experience.

Our teachers are “free” to come to your Manhattan, Brooklyn, or Riverdale home or office and give you lessons in the guitar, piano, drums, or a number of other instruments. Their mission: to keep music alive and well!