With Brooklyn Music Lessons, You’ll Never Have to Wing It 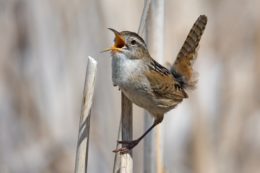 Happy New Year and welcome to January. In 2016, as in previous years, we remain dedicated to covering all the important topics related to music – no matter how weird or wacky they might be. Let’s start with tomorrow: January 5th is National Bird Day, the intention of which is to raise public awareness about all kinds of issues related to these feathered creatures.

Our own interest, not surprisingly, lies mostly in the vocalizations of avian sounds, commonly known as bird songs. In case you are wondering, this is not our first foray into the realm of non-human music. As animal and nature lovers, we are as happy as a lark to think out of the box!

Call of the wild

Let us start by saying that, in a literal sense, there is no such thing as a swan song. It sounds poetic, but it’s a myth. Having said that, there are plenty of birds that do sing: nightingales, thrushes, warblers, and many others. Whether they “perform” in the morning (the so-called “dawn chorus ”) or at night , the chirping is sweet and soothing. And if you want to add some rhythm to the bird chorus background, there is nothing better that a cuckoo ! But as innocent as all that chirping sounds, bird scientists –who are called “ornithologists”- have found that these creatures do it for a specific reason, which proves that birds are not so “bird-brained” after all: they sing to attract and impress potential mates, or to mark and defend their territories. We have no idea whether the birds ever sing just for pleasure (though we certainly hope they do), but we do know they don’t have the same organizational rules as human-made music.

Chirping up the right tree

Here are some more fascinating facts about bird songs:

It’s worth crowing about!

Hey Joe Guitar is an excellent music school, but we do have certain limitations: our lessons are not…for the birds, or, for that matter, for any other winged, beaked, tailed, or four-legged creatures. Sorry! But if you are a human being, you’ll be glad to know that our teachers have “people” skills. They will come to your Manhattan, Brooklyn or Riverdale home on the fly, and teach you to sing or play any musical instrument. The birds can’t play the guitar or piano, but our teachers sure can. And that’s a feather in our cap!