The Tale Of Two Christmas Calendars: NYC Music School Brings You Up To Date! 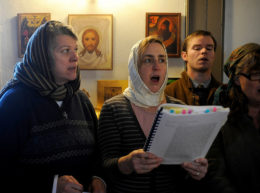 If you think that Christmas is over, you are right… but also wrong! While the Catholic and Protestant celebrations are indeed behind us, Eastern Orthodox churches are yet to commemorate this holy event on January 7.

Actually, Eastern Orthodox congregations don’t dispute December 25 as the time of Christ’s birth, but they follow a different calendar – one that lags behind by nearly two weeks.

The Orthodox churches adhere to an old, Julian calendar, named after its creator Julius Caesar, who introduced it in 46 BC as a reform of the ancient Roman timetable. In 1582, however, Pope Gregory XIII modified the Julian calendar in order to correct its inaccuracies and miscalculations, such as 11 extra minutes each year, which was not compatible with the timing of the solar year.

The Gregorian calendar made up for the 11-minute discrepancy and has been widely used throughout the world. But the liturgical calendar of the Eastern Orthodox Church continues to follow the Julian system. So now you know: Christmas is celebrated on January 7 and New Year on the 14th.

Despite the discrepancy in the timing of their observances, members of the Orthodox Church celebrate the same sacraments as other Christians. In fact, in the early days of Christianity, Roman Catholics and Orthodox congregants worshipped together. The split between the two denominations occurred in 1054 as a result of a dispute over the Papal authority.

Quite a few countries follow the Orthodox teachings, including Greece, Russia, Ukraine, Moldova, Belarus, Bulgaria, Serbia, Macedonia, and Romania. The immigrants from these countries established their churches in the United States, and in NYC as well.

Just as Western Christians observe the four weeks of Advent, their Eastern Orthodox counterparts practice the 40-day Nativity Fast, which is a traditional time of prayer, abstinence and penance.

On January 7, churches may light a fire of blessed palms and burn frankincense to commemorate the gifts the three wise men brought to baby Jesus.

There is one common thread that the Western and Eastern Christians share in their celebration of Christmas. Do you know what it is? You guessed it: music!

We love the songs that resound throughout the Orthodox churches at Christmas, and we especially enjoy hearing them in languages of each country. Here’s a sampling:

These are just a few examples, but they give you a sense of how beautifully solemn Eastern Orthodox Christmas is.

It’s not all Greek to us!

At Hey Joe Guitar, we find religious music, regardless of its denomination, truly inspirational. But it’s no news to you that we love ALL styles of music, whether put into song or played on any instrument (after all, we are a music school!).

Our excellent teachers (many of whom are multi-lingual too) come to your Manhattan, Brooklyn or Riverdale (Bronx) home or office to give you lessons adapted to your (or your child’s) level.

Whether you celebrate New Year’s on January 1 or the 14th, 2014 is a great year to start guitar lessons, begin the piano, or learn any other musical instrument!