Learn To Play Guitar – And Other Instruments – In A Flash, At A NYC Music School 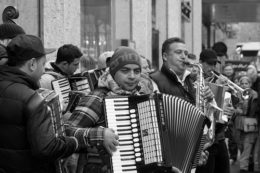 Have you ever heard of a New York resident named Bill Wasik? Those in the know will recognize him as a senior editor of Wired Magazine and former senior editor at Harper’s Magazine.

By now you might be wondering what a journalist has to do with the topic we cover in these blogs, which is music. Actually, Wasik does have an indirect role in bringing music to people all over the world: he is the creator of a 21st century phenomenon known as a flash mob, which he started in 2003 as a social experiment of sorts. Even though the first one he organized that year at Macy’s on Herald Square was a flop, since then the trend has grown, gained popularity, and gone
viral.

In a nutshell, a flash mob is a sudden gathering of a group of people in a public place to perform some act of artistic expression, to the surprise of unsuspecting onlookers and passersby. The flash mobs we love most are the ones that feature music. We would like to share with you some of our favorite ones and hope you will find them as uplifting as we do!

Causing a scene (but it’s all good!)

What is so cool about this phenomenon is that it started in NYC (as so many cool things do) and, in the past 10 years, has spread around the world like wildfire. Just look at these examples:

Spain: We really love this rendition of Beethoven’s “Ode to Joy” from his Ninth Symphony, which is one of the most famous works in the history of classical music:

Canada: You don’t expect to hear Handel’s “Messiah” at a mall food court, do you? It just shows you that you should always keep an open mind:

Mexico: An even more unlikely venue for a rousing chorus is a public library, where total silence is de rigueur. This, however, is one instance where a librarian didn’t hush the crowd:

Great Britain: What a joyful scene at the arrivals terminal at London’s Heathrow airport. Wouldn’t you like to be welcomed like this?

Belgium: We really like this spunky dance-and-song flash mob at a train station:

New York: Of course, we can’t bring you flash mobs from around the world and neglect to mention ones from our own fair city. This particular one at a Queens grocery store is off-the-wall, which is why we like it so much:

The power of music

What is so special about these flash mobs? We think the answer is pretty obvious. Just watch how the spectators react to these performances: the delight, pleasure, and sheer enjoyment are written all over their faces. This response shows that music has a positive impact on people’s moods and emotions – wherever in the world they live.

At Hey Joe Guitar music school, we consider ourselves lucky to share our love of music with our students. We can’t promise that our teachers will perform a flash mob or create a new social phenomenon at your Manhattan, Brooklyn or Riverdale (Bronx) home or office (in fact, we are certain they won’t), but they will give you …phenomenal music lessons nevertheless!