Spice Up the Holidays with New Music 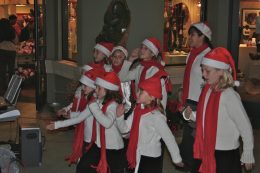 Spice Up the Holidays With New Music

It’s the beginning of December and chances are you are already hearing the same old, traditional holiday songs over and over again.

Now, we don’t mean to denigrate the beloved classics

because to many people they represent the very essence and spirit of Christmas or Hanukkah.

Having said that, we were not totally surprised by a study that came out a couple of years ago. It showed that, while many of us like to hear some holiday music in the beginning of the season, we tend to dislike it towards the end, simply because we’ve been over-exposed to it.

It seems that too much of a good thing can actually have the opposite effect!

According to an article in the Washington Post, the reason for the enduring appeal of the most popular holiday songs is because “they were so well crafted…and so deeply expressive in capturing the holiday experience in a way songwriters these days are unable to do.”

Why aren’t more new Christmas songs being written, you may wonder? The above-mentioned article explains it this way: “No one, not even such superstars as Taylor Swift or Beyoncé, has managed to turn a temporary seasonal hit into an evergreen.”

You may argue that holiday songs don’t necessarily have to have the enduring appeal of the old classics. Even if these new tunes are hits for one or two seasons only, they could still bring “comfort and joy” to millions of people.

Do You Hear What We Hear?

In fact, there are some new holiday songs being recorded – or, in some cases, new versions of old favorites.

We particularly love this beautiful rendition of “Hallelujah,” by Pentatonix, which is on the group’s new 2016 holiday album.

Already last year we became fans when we heard this acapella group’s unique version of “Little Drummer Boy, which shows how old classics can be performed with a new twist.

There are also some other modern holiday songs for your listening pleasure. Among them you’ll find “Christmas Lights” by Coldplay, “Love is Christmas” by Sarah Bareilles, and several others.

What about Hanukkah songs? Adam Sandler may or may not like them all, but here are some fun renditions for you to enjoy.

All these new tunes may or may not become holiday classics, but they are fun to listen to while they last!

< Previous Post In a Galaxy Far, Far Away, a Musical Star Trek is Underway Next Post > The Many Sounds and Functions of the Guitar