In a Galaxy Far, Far Away, a Musical Star Trek is Underway 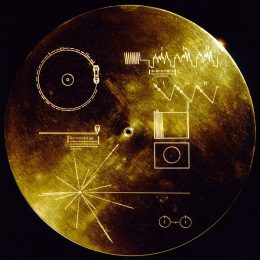 Do aliens like earthly music? We don’t know for sure but we certainly hope so!

We do know that the late astronomer, cosmologist, and astrophysicist Carl Sagan believed in the universal (literally) appeal of music and its power to connect terrestrial and extraterrestrial beings.

Back in 1977, Dr. Sagan spearheaded the creation of Voyager Golden Record – a kind of time capsule containing 27 tracks of earthly music that NASA sent into space on Voyagers 1 and 2 with the hope that aliens would hear and love it.

The eclectic mix includes such oeuvres as Bach’s Brandenburg Concerto No. 2 in F, Peruvian panpipes and drum, a Georgian chorus, Louis Armstrong’s “Melancholy Blues”, and many others.

A Gift to Cosmos

As president Jimmy Carter said at the time of the launch in 1977, “This is a present from a small, distant world, a token of our sounds, our science, our images, our music, our thoughts and our feelings. We are attempting to survive our time so we may live into yours.”

At the time, very few of these gold-plated copper records were produced – two were sent into space and 10 are on display in NASA facilities. It is said that not even Dr. Sagan was able to obtain a copy.

But soon it will be easier to do so. A new Kickstarter campaign is creating replicas of the gold-plated phonograph records, which will be available for the first time here on Earth in August 2017, just in time to celebrate the 40th anniversary of the Voyager launches.

Human beings have always been fascinated by the sounds emitted in outer space.

Do aliens appreciate our music? There is some evidence that they do!

Seriously though, in all likelihood we will never know whether extraterrestrials enjoyed the sounds on the Voyager Golden Record, even if it does reach alien civilizations.

That’s because neither of the Voyager spacecraft is heading toward any defined stellar destination, so no encounters of the third kind are planned.

Voyager 1, however, entered interstellar space in 2013 and it is now almost 13 billion miles away from Earth. It is closing in on a star called Gliese 445 and is expected to reach it in about 40,000 years.

But if our music does ever reach extraterrestrials’ ears, chances are good that, in the very least, they will be intrigued by it.

According to Space.com, “Humans would probably have little to teach them about science and mathematics that they don’t already know…However, our art and music is singularly human, and could likely be fascinating to an alien species.”