NYC Guitar School Knows the Name of the Game! 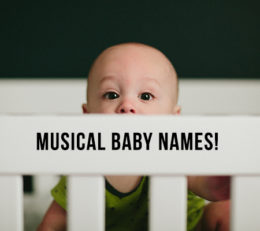 What’s So Special About Manhattan Music Lessons? You Name it!

What’s in a name? A lot, actually. Whether it’s old-fashioned and traditional or unusual and funky, each one reflects who you are – or, in the very least, your parents’ taste at the time of your birth.

Often, newborns are named after a member of the family but at other times, names are figments of their parents’ imagination and creativity – maybe derived from places they had lived in, like Brooklyn, or cities they visited, such as Rio or Paris (we don’t know of anyone named Cincinnati, do you?)

Of course, you can end up with a name that lands you in trouble , or, even worse, with no name at all!

Speaking of unusual names, we like – which should come as no surprise to anyone – the ones that derive from music. Let’s look at some of them.

Not just Tom, Dick and Harry

One of the more popular music-related names for baby girl is Melody. It needs no explanation – it sounds soft and…melodious.

Then there is Allegra, which, in musical terms means a brisk movement. So it is easy to imagine that a girl named Allegra would be active and happy. And you may be interested to know that this name has become more popular in the United States in the past few years.

Another one we really like is Aria. It’s easy to imagine that any female lucky enough to have this name has a beautiful singing voice. And even if she doesn’t, it still sounds light and sweet.

Then there is Octavia. In music, an octave is the interval between one pitch and another, so we are guessing that an Octavia would have a strong voice. What about Viola? It comes from Latin and means “violet.” We really like this one too.

Let’s go to boys’ names. There is Rock, Piper, and Reed, all of which impart strength of character (at least in our interpretation). And, believe it or not, Banjo is also a real name – actress Rachel Griffiths gave it her son.

Do you want to see more music-related names? You might be surprised to see how many there are.

We are a household name

Musical-themed names are great fun, but even if you were given the most ordinary name, you can still have an extraordinary ear for music. After all, who knew from day one that a boy named Wolfgang Amadeus would become a musical genius, as had Johann Sebastian, Ludwig, and scores of others.

What we are saying is this: your name defines your identity, not your affinity for music. After all, our school is called Hey Joe Guitar, and not Hey Rock or Hey Banjo.

The same goes for our teachers: some of them have quirky names and others don’t. But you can be certain of this: the one who shows up at your Manhattan, Brooklyn, or Riverdale doorstep deserves to have his or her name in lights!