New York Music School Has a Familiar Ring to it! 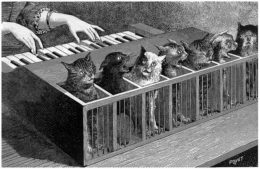 The name of Leonardo da Vinci is most often associated with his famous painting, the Mona Lisa. However, Leonardo was – literally – a quintessential Renaissance man, whose many talents encompassed mathematics, architecture, engineering, and other fields.

Among his many inventions was a little-known musical instrument, which he called “viola organista” – a string organ that can best be described as a blend of a harpsichord and cello.

The viola organista never really caught on, but recently a Polish musician used Leonardo’s 500-year-old design to build – and perform on – the mysterious instrument. Its sounds are truly unique and very beautiful.

Who knows how popular Leonardo’s invention would have become had it ever been mass-produced. It may not have ended up in the Louvre museum like the Mona Lisa, but it could have brought lots of pleasure and enjoyment to music lovers everywhere!

Playing their own tune

This is just one example of a little-known instrument, but there are many others. Unlike the viola organista, however, these instruments actually exist and are used – though not widely. Here’s a list of some interesting musical creations you likely never knew existed:

There are, of course, many, many more little-known but interesting instruments out there. Aren’t you glad we told you?

We’re not re-inventing the wheel

If you would like to have lessons in any the above-mentioned instruments, we’d better tell you right away: regretfully, we won’t be able to help you.

One of our excellent teachers will come to your Manhattan, Brooklyn or Riverdale home or office and give you or your child music instruction. We may teach only ordinary instruments, but our lessons are truly EXTRAordinary!

< Previous Post Please, Be Mellow to the Cello! Next Post > Brooklyn Music School is Down to Earth!