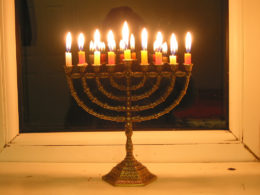 Starting yesterday and for the next eight days, Jewish people around the world celebrate Hanukkah. Like every year, there is no lack of cool Hanukkah events and celebrations being held in New York City, for adults and kids alike. This holiday commemorates the victory in 165 B.C.E. of the Maccabees over the Greek army that occupied the Holy Land, and the subsequent liberation and “rededication” of the Temple in Jerusalem. Because this holiday is traditionally celebrated with the lighting of the menorah, it is called the Festival of Lights.

In fact, Hanukkah arouse from what could probably be called the world’s oldest oil shortage crisis: when the Maccabees liberated the Temple, they found only a small cruse of oil – enough to light the Menorah for one day. It would take eight days to produce new oil, but, miraculously, that one cruse lasted eight days and nights.

There is not as much Hanukkah related music as there is about Christmas, but we really like these flash mobs and other street scenes that could be enjoyed during the holidays:

Now, you may be wondering if there are any classical pieces that would fall under the category of Hanukkah music, the way that, for instance, the “Hallelujah Chorus from Handel’s “Messiah ” symbolizes Christmas? Not really, but there are some beautiful classical compositions of Jewish themes, such as Leonard Bernstein’s 3rd Symphony (“the Kaddish”) , Sergei Prokofiev’s “Overture on Hebrew Themes ,” and quite a few others. Here is the bottom line: no matter what kind of Hanukkah (or other holiday songs) you enjoy the most, one of our music teachers will give you a lesson in the privacy of your Manhattan, Brooklyn, or Riverdale home or office. With that, we wish you a very happy holiday season!