Manhattan Music Lessons: We Are Making Our Own History! 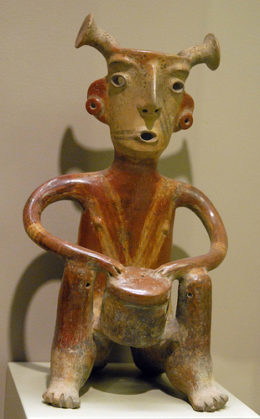 Music – all genres and styles – is such a big part of our daily lives, but have you ever wondered why and how it was first invented? By the same token, you might also ponder this question: at what point of human evolution had music been created, and what did it sound like?

Those are all very good questions, and unfortunately we – or anyone else, for that matter – don’t have all the answers. The origins of music remain in the realm of mystery, but some plausible theories do exist.

This is what is now commonly accepted: a 40,000 year old flute (the oldest instrument in existence today), carved from a bear’s bone with the hollow wing-bone of a giant vulture, indicates that music was played by prehistoric tribes long before written language – and sheet music – was invented. It is believed that music of that time was used to scare off animals or as part of rituals.

And here’s something you may not have known: Neanderthals – extinct species closely related to modern humans who lived 200,000 to 30,000 years ago – were incapable of intelligible speech, yet scientists say they played music and sang.

And here’s a mind-boggling tidbit: British archaeologists believe that our Neanderthals ancestors were partial to…arias! Here’s what they found: “The musicality of the Neanderthals can be identified more with opera than with rap because in addition to music, these hominids also used dance and body language as forms of communication.” Read more.

The birth of music

So what prompted the Neanderthals and prehistoric humans that followed them to create music? As we mentioned before, it’s all a matter of speculation. However, several theories have been formulated over the years. Let’s have a look at some of them:

Evolutionist Charles Darwin believed that music was created as a sexual come-on, kind of a “mating call,” if you will, for the purposes of procreation.

However, other researchers believe that music was invented as a social tool: to bring early humans together in order to form close-knit communities. In other words, music was used to build group cooperation – a prehistoric version of social networking we use today.

As we evolved, so did music, as well as our listening habits. True, we still appreciate music through concerts and other performances where people congregate in a group.

But we also enjoy listening to music alone. In modern times, we don’t rely on a group dynamics to survive and have evolved into a more solitary society that stresses individual needs more than those of a community. Whether this is a good or bad phenomenon we cannot say, but we are happy that music didn’t follow the fate of the Roman Empire and disappeared from our world forever.

Let’s make our own history!

The true origins of music might remain elusive, but one thing is clear: its unique ability to positively influence our emotions, mood and behavior.

We at Manhattan music lessons appreciate how music has evolved and developed over the millennia, and are happy to be part of NYC’s music scene. Whatever style of music or instrument you want to learn (no flutes made out of bears’ bones, please), our teachers will come to your Manhattan, Brooklyn or Riverdale home and give you lessons.