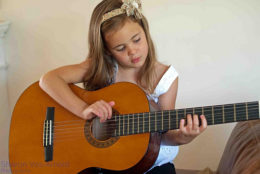 That’s true – with our NYC guitar lessons, playing an instrument never gets old!

“All I really need to know I learned in kindergarten.”

Yes, you can argue that this famous quote and book title by minister and author Robert Fulghum is flawed. After all, advanced calculus or quantum physics are not your typical topics five year olds routinely master.

However, for the purpose of this blog, let’s not be such purists. The general idea here is that young children are naturally curious, creative, and motivated to learn new things – a great time to expose them to music.

While there is no guarantee that this early start will turn them into prodigies or even lifetime music aficionados (though we can certainly hope this will happen), the immediate effects of music training are well documented: sharper learning skills, improved motor coordination, and better emotional stability.

Those are compelling reasons to strike while the iron is hot (in the manner of speaking, of course) – certainly before your sweet child turns into a burly and defiant teenager, for whom “music” means harsh-sounding, ear-shattering sounds of heavy metal, not the soft and mellow tunes.

True, all you, as a parent, can do is guide and encourage them while they still listen (and maybe even look up) to you.

From the mouths (and fingers) of babes

So many of the most prominent musicians and composers started to “dabble” in music at a very young age and had become masters of their art.

The best known, perhaps, is the ultimate “child prodigy,” Wolfgang Amadeus Mozart, who famously started learning the keyboard instrument called the clavier at the age of three, and by five he was composing minuets.

Ludwig van Beethoven too was an early starter: he played the piano at the age of five, gave his first public performance at seven, and composed his first piece of music at 11. In both Mozart’s and Beethoven’s cases, parental guidance was crucial: Wolfgang’s father, Leopold, and Ludwig’s dad, Johann, were driving forces behind their sons’ musical training. We don’t know whether these two youngsters had to cajoled into playing, but the result was truly amazing!

There were others, too. Frederic Chopin began to play the piano at five. Violin virtuoso Yehudi Menuhin started music lessons at four, playing his first concert at seven. The list is truly endless.

What if you didn’t start your music training in childhood? Is it ever too late to begin? We can’t say this empathically enough: when it comes to music (or learning in general), there is no such thing as “missing the boat.” Music training is one boat you can easily catch midstream.

Just ask Andrea Bocelli . The world-renowned Italian tenor started his opera career at 34, even though some “experts” warned him that it was too late to begin.

We are here to tell you otherwise – that there is no such thing as the “wrong” time to start playing an instrument or taking voice lessons, and don’t let any so-called “experts” or other naysayers dissuade you.

Fact is, adults of any age can derive many benefits from music, just as children do. As Greek philosopher Plato put it, “Musical training is a more potent instrument than any other, because rhythm and harmony find their way into the inward places of the soul.”

Who can argue with that?

Not for kids only

Now, we can’t promise you that your child will become another Mozart (or Einstein, for that matter), but with our Manhattan, Brooklyn, and Riverdale in-home music lessons, he or she will be able to learn to play an instrument in the comfort of your own home.

As we stated above, playing music is a wonderful activity for people of all ages – whether you are a late bloomer, a baby boomer, or just a “regular” adult. Remember: the oldest violins make the sweetest music.

We bet you didn’t learn THAT in kindergarten!

Photo by Angel of light