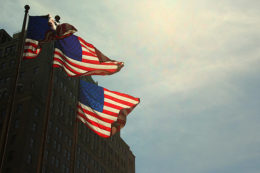 Are you ready to celebrate the 4th of July, joining Americans in our city and country in commemorating the Independence Day? So are we at Manhattan Music Lessons!

Because no matter where we came from and what our ethnic, cultural or religious background is, we are all united in commemorating July 4,1776, the day Americans declared their independence from the British.

Today, the 4th of July is a day of cheerful celebration, with picnics, parades, and fireworks displays taking places all over the country. But have you ever wondered how the very first Independence Day was celebrated?

Birth of the nation

According to historic accounts, Declaration of Independence’s full text was first published in The Philadelphia Evening Post on July 6, 1776 and publicly read in Philadelphia, Easton PA, and Trenton NJ two days later. As the announcement was made, cheerful shouts and firing of muskets greeted the proclamation. And as the news spread across the 13 original states (at that time called “colonies”), the newly independent Americans rang bells and lit bonfires, removing all signs of the British monarchy.

The following year, on July 4, 1777, ships in the Philadelphia harbor were decorated in red, white and blue, and cannons shot 13-gun salutes in honor of each state.

What about the fireworks? They didn’t become part of the celebrations until 1816, when America’s technological advances made the colorful displays possible.

Oh say can you see?

Marching bands or other musical groups perform so many patriotic songs during the July 4th celebrations, but way back in 1776, there were actually very few such melodies.

Two notable exceptions are “The Liberty Song,” released during the American Revolutionary War in 1768, and “Yankee Doodle Dandy,” first sung sometime between 1754 and 1763. Interestingly enough, “Yankee” was originally composed by British soldiers to make fun of the disheveled colonial Yankees with whom they served during the Seven Year War between the British and French North America – today’s USA and Quebec in Canada. Most people who sing “Yankee Doodle Dandy” today have no clue that this popular song was actually intended to mock our soldiers!

The songs we think of as patriotic today, such as “My Country ‘Tis of Thee,” “America the Beautiful,” “Stars and Stripes Forever,” and the national anthem, “The Star-Spangled Banner” were actually composed in the 1800s. Other popular tunes, like “God Bless and America” and “This Land is Your Land,” were written in the 20th century.

NYC has plenty of Independence Day activities planned, including parades, fireworks, and concerts.

And what about the songs for your picnics and backyard barbeques, something newer (but no less patriotic) than the standard 4th of July fare listed above?

May we suggest these “gotta-love-them” tunes:

Would you like to learn to play or sing these and other patriotic tunes (or any kind of music for that matter?)

You can, with Manhattan music lessons. Please contact us so we can match you (or your family member) with an excellent music teacher who will come to your home or office. You’ll have a great experience – even without the fireworks!

< Previous Post New York Music School: Can’t Carry a Tune? We Will Come to the Rescue! Next Post > The Sounds of Summer, with Manhattan Music Lessons