High Times in Low Manhattan (It Includes East Village Too)! 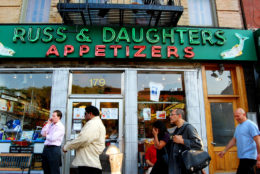 Are you looking for music lessons on the Lower East Side or in the East Village? No problem – we’ll be happy to oblige!

Stretching east from the Bowery to the East River Park, bounded on the north by Houston Street and on the south by Canal Street and East Broadway, this once shabby part of Manhattan has morphed over the years into a trendy enclave.

Give me your tired, your poor…

“Everybody ought to have a Lower East Side in their life,” said famed composer Irving Berlin, who certainly knew what he was talking about because, upon their arrival in America in 1893, his family had lived in a cold-water-only basement apartment on Cherry Street. In fact, lower Manhattan is just a hop skip and jump away from the Statue of Liberty and Ellis Island, where millions of immigrants were processed between 1892 and 1954. A lot of these people settled, like Berlin, on the LES, in what was then a gritty, crime-ridden slum. There is no better place to get a sense of how the “huddled masses yearning to breathe free” used to live here than the Lower East Side Tenement Museum at 103 Orchard Street. In addition to being the epicenter of LES’s history, the eight blocks along Orchard Street provide great “retail therapy” – a wide variety of goods that can be bought at rock-bottom prices.

From rags to riches

In a way, the LES’s history is the quintessential story of the “American dream.”

From a poor neighborhood populated by immigrants trying to make a better life for themselves, the Lower East Side has gradually become a vibrant “in” place of entertainment, dining, and art galleries.

This part of Manhattan is also considered to be more relaxed than neighborhoods to the north. Its easy and casual vibe prompted Lady Gaga to leave her family’s Upper West Side apartment and move to the LES. Her digs at 176 Stanton Street were considerably less posh than her former home, but living in a slightly run-down house had allowed the budding artist to, as she put it, “understand a whole different side of the pavement.”

Another advantage of the Lower East Side, especially for the artsy, creative types, is its vicinity to the East Village.

The (relatively) new kid on the block

Geographically the East Village, bounded by Houston Street to 14th Street and East River to Fourth Avenue, is part of the Lower East Side.

However, geography aside, the East Village has forged an identity of its own. The beatniks, musicians, artists and hippies who flocked to Greenwich Village in the 1950s and 60s were also setting up camp in the eastern part of the neighborhood, which, fittingly enough, got the name of East Village. As a 1964 New York Times guide pointed out, “artists, poets and promoters of coffeehouses from Greenwich Village are trying to remelt the neighborhood under the high-sounding name of ‘East Village.’”

East Village has many claims to fame, one of which is that it boasts the highest concentration of bars in NYC.

It was also a starting point for careers of numerous musicians like Patti Smith.  Bands such as The Grateful Dead, Led Zeppelin, Sly and the Family Stone, and the Allman Brothers also performed in the neighborhood.

What about today’s music scene?

It is just as alive. Here are just some of the places on the Lower East Side and East Village where you can listen to live performances:

Okay, so we are making a reference here to Carly Rae Jepsen’s hit song, but, kidding aside, if you live or work on the Lower East Side or in the East Village (or any other part of Manhattan for that matter), we’ll be happy to come to you and give you music lessons.

We teach a variety of instruments, whatever your age and level may be.

< Previous Post High-Power Side by Side With Laid Back – That’s Financial District and South Street Seaport Next Post > Royals Don’t Live in Tudor City, but it is Fit for a King!