With the Trumpet, It’s Always a Wonderful World 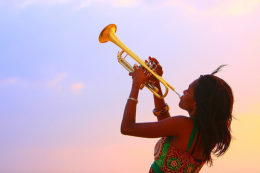 Blow your creative energies into a trumpet – with Manhattan music lessons

Think trumpet and your mind will likely conjure up images of the great Louis Armstrong playing this instrument with such skill, mastery, and passion. There were and still are many accomplished trumpeters – Dizzy Gillespie, Miles Davis and Wynton Marsalis among them – but for many people Armstrong will forever remain the most famous of them all. As he himself said, “My whole life, my whole soul, my whole spirit is to blow that trumpet.”

By the time Armstrong and his contemporaries like Freddie Keppard started to play the trumpet at the beginning of the 20th century, the instrument had been – in different forms – around for a long time.

Of mice and (great) men

Long before the trumpet joined the brass family of instruments, which also includes the tuba, the trombone, the cornet and the euphonium, it was just a primitive device used by ancient civilizations like the Greeks and the Egyptians (in fact, pictures of the trumpet were found in King Tut’s tomb). In those days, trumpets were made from animal horns or shells, a far cry from the brass and copper used today. They also didn’t have valves or keys. However, their primary purpose was to signal or announce various events rather than play music, so the primitive construction was in line with the needs. Trumpets were also used as “war” tools – not exactly in the same way as actual weapons, but, rather, to send signals on battlefields. This was, needless to say, a dangerous job, because the enemy would target the trumpeter to prevent him from signaling to his army. And, though we hesitate to mention this in the same breath as the great Louis Armstrong, this instrument was also used to herald the arrival of the Mighty Mouse: “So let the trumpet players play, For Mighty Mouse is here today!” Just saying!

Bring on the music!

It wasn’t until the 18th century that the trumpet became a bona-fide musical instrument when a famous composer of that era, Joseph Haydn , wrote the Trumpet Concerto in E flat major/ In the following century, due to improvements in its build and sound, such as addition of the valves enabling the trumpet to play the chromatic scale evenly, the trumpet had become an orchestral instrument. However, the trumpet’s heyday, especially in the United States, happened with the advent of jazz. In the early decades of the 20th century, jazz ensembles used the trumpet as the lead instrument because it was the loudest of the lot! Today, there are several varieties of trumpets for different musical scales. The most common of them is the B-flat trumpet; other types include the F, D, E, G and the smaller C trumpet .

Blow your own trumpet!

“He seems determined to make a trumpet sound like a tin whistle,” a Welsh politician, Aneurin Bevan, once observed. We don’t know who Bevan was referring to, but we are guessing that the player in question either didn’t take lessons or didn’t practice enough. If you like a high-energy, vibrant and powerful sound that can play all types of music – classical, rock, pop, soul, and, of course, jazz – then a trumpet is for you. Are you ready to start learning but don’t know where? Hey Joe Guitar Is synonymous with top-of-the-line music lessons: one of our teachers will come to your Manhattan, Brooklyn or Riverdale residence or work place, and teach you or a family member to play the trumpet – or any other instrument for that matter. Private music lessons are the best way to ensure your trumpet sounds…like a trumpet, and not like a tin whistle!

< Previous Post Ah, the Never-Ending Joy of Sax! Next Post > The (Not so Hidden) Charms of Williamsburg