Ah, the Never-Ending Joy of Sax! 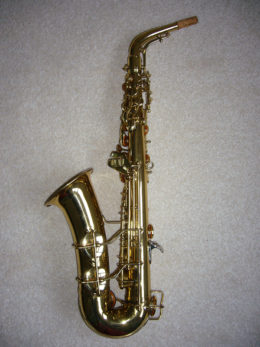 Be Blown Away – at New York Music School

“What do a saxophone and a baseball have in common?  People cheer when you hit them with a bat!” As jokes go, this may not be the best one ever, but we thought we’d start off with a bit of levity. We would like to make it clear, however, that we at Hey Joe Guitar do not approve of the saxophone being used in the same way as a baseball bat. Needless to say, if you use this instrument for purposes other than music, you will never hit a home run!

What’s age got to do with it?

No, Tina Turner doesn’t, to our knowledge, play the sax. But speaking of age, the saxophone is – relatively speaking – a new kid on the block. While the guitar, recorder, drums, piano and many other musical instruments trace their origins to the Middle Ages, or even pre-history, the saxophone was invented only in the mid-19th century. However, in more than 160 years since this late bloomer emitted its first baby sound, it has conquered all styles of music and won the hearts (and ears) of musicians and music fans around the world. Saxophones come in a variety of sizes and types, from the highest pitch to the lowest: the soprano, alto, tenor, and the baritone. They also have different sizes and shapes, adapted to the age and the skill level of the player.

What’s in the name?

When it comes to the saxophone, the derivative of the instrument’s name is simple and straightforward: it bears the name of its inventor, Belgian instrument maker Adolphe Sax. Like so many other inventions, the saxophone was borne out of sheer necessity – at least the necessity to Sax’s sensitive ears. He noted that orchestras of his time were missing a sound that would be as crisp as the bass section and as soft as the woodwinds. So he went on to fill that void by constructing, in 1846, the world’s first saxophone. The new instrument made its official debut in Paris, in Chant Sacre , which French composer Hector Berlioz wrote especially for the saxophone. Berlioz conducted the performance, while Adolphe Sax played. The saxophone first came to America in 1853, when French saxophonist Henri Wuille gave a series of concerts here. But it was only at the dawn of the 20th century, with the advent of new musical styles, that the saxophone grew in popularity.

The sax was only a few decades old when rag, blues, jazz and rock started to emerge on the music scene. The instrument proved to be a perfect match for all these genres. John Coltrane, Charlie Parker, Stan Getz, Lester Young, Sonny Rollins, and Kenny G are just a few of hundreds of talented saxophonists and jazz legends of the past and present. Interestingly enough, Lester Young’s nickname was “Prez,” long before a real “Prez” showed off his talents with a sax: Bill Clinton played his favorite instrument throughout his two terms in the Oval Office, saying he had kept up the craft because his day job as the commander-in-chief didn’t offer him enough security!

Sax in the city

The great Charlie Parker once said: “Don’t play the saxophone. Let it play you.” Here’s our recommendation: unless you are as gifted and accomplished as Parker was (and most people clearly aren’t in his league), then you do have to take lessons and learn to play the sax before you allow it to “play” you. Contact us and one of our excellent teachers will come to your Manhattan, Brooklyn or Riverdale home or office and give you sax lessons – as we do for many other instruments, big and small. You may not end up with better baseball skills, but your (musical) pitch will be much improved!

< Previous Post Beat it, and Drum Up Some Great Music! Next Post > With the Trumpet, It’s Always a Wonderful World