Beat it, and Drum Up Some Great Music! 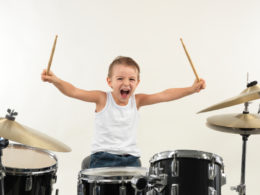 No Sounds of Silence with Brooklyn Drum Lessons

First things first: if you like soft and mellow music, drums are definitely not for you – though a violin, flute, cello, as well as other strings and woodwinds, will fit the bill.

But if you prefer the strong rhythmic “pa rum pum pum pum” sounds, drums are a terrific choice. You might have to buy earplugs for your family and placate the neighbors, but at least you’ll be mastering the very cool art of drumming, and you really can’t…beat that!

To an untrained person, music emitted by this instrument – that has nothing in common with the drum that lives in your ear – may sound like a lot of haphazard noise. We can assure you that it is neither haphazard nor merely a “noise.” As percussion instruments, drums can be loud, but that’s because there is nothing meek or subdued about them. Just as people who are energetic and exuberant are usually louder than their more timid counterparts, the drums too can be noisier than many other instruments in a band or an orchestra. This fact was very well expressed in a poem by Walt Whitman: “Through the windows – through doors – burst like a ruthless force.” And then: “So fierce you whirr and pound, you drums!” So perhaps you should think of the drum as an instrument with an attitude, one that likes to come across loud and clear! Another misconception you may have heard is that playing drums doesn’t require much training – just pick up the drumsticks (not to be confused with chicken legs), and start hitting. That is not true – it takes a lot of skill (not to mention strength and hand coordination) to get just the right sound out of this instrument. As Tony Williams , regarded as one of the most influential jazz drummers of the 1960s described it: “Playing fast around the drums is one thing. But to play music, to play with people for others to listen to, that’s something else. That’s a whole other world.”

From tree trunks to (not a heavy) metal

The forefather of the modern drum set was likely a small cylindrical instrument used as far back as 3000 BC. Throughout history, different variations of the drum played – no pun intended – a pivotal role in religious and social rituals and ceremonies. These early drums were often made from hollow tree trunks with animal skins stretched over them, a far cry from the modern percussion instruments most commonly made from steel, aluminum, brass, or bronze. Interestingly enough, sounds of drums and trumpets set the mood (mostly that of impending gloom) in many of Shakespeare’s plays. In the late 19th century, after the bass drum pedal was invented, drum kits, which usually included a bass drum, side and tenor drums, tom toms, as well as various cymbals, allowed a drummer to play several instruments at once. These sets of various toned drums were also used in marching, parade, and military bands – a tradition that lives on to this day. And of course, drums are an integral part of jazz, rock, and heavy metal bands, including various branches of these genres.

The beat will go on!

Here’s something you should know: drums not only create music, but are also good for your health and fitness: half an hour of vigorous playing can burn up to 270 calories! So would you like to march to the beat of your own drum? Our teachers will be happy to…drum the music into you! What we mean to say is that we will come to your Manhattan, Brooklyn or Riverdale home or office and give you (or your child) great lessons. In no time at all, you will be singing this tune by a British indie band, Florence and the Machine:

“There’s a drumming noise inside my head. Louder than sirens Louder than bells Sweeter than heaven.”