With the Harmonica, You Have to Watch Your Mouth! 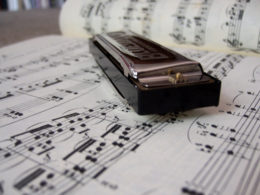 Our NYC harmonica school gives lessons on how to make the most of this tiny instrument.

You know the saying: to each his (or her own). It means that we all have our own individual tastes and preferences, and that includes the kind of music we like and the instruments we want to listen to or play. If you like big, then upright bass, drums, or the piano would be a good fit for you. But if you are partial to a small and light instrument that you can carry in your pocket, the harmonica is a good match.

In fact, it is – hands down – the most portable instrument you will likely find. It is way smaller than a breadbox, but certainly makes better music! There is no doubt about it: the harmonica is a tiny instrument with a big sound.

Also called the French harp, blues harp, and mouth organ, the harmonica makes music through a set of reeds that vibrate when you blow air through any of the instrument’s 10 holes. Although there is some evidence that the ancient Chinese made the first harmonica, it was a German teenager, Christian Friedrich Buschmann, who is credited with this invention in 1821. Although Buschmann’s design was rudimentary and even primitive by today’s standards, he was quite pleased with it. As he said to his brother, the new instrument was “truly remarkable. In its entirety it measures but four inches in diameter…but gives me twenty-one notes, and all the pianissimos and crescendos one could want without a keyboard, harmonies of six tones, and the ability to hold a note as long as one would wish to.” With time, the harmonica’s initial design was modified; five years after it was invented, a Bohemian instrument maker named Richter (his first name is not known), developed an improved version that resembles the type we use today. And don’t be fooled by the harmonica’s size – this small instrument comes in different varieties, such as diatonic, chromatic, tremolo, octave, orchestral, and bass versions, depending on the sounds you want to produce and the genre of music you are playing – be it folk, blues, or rock and roll.

Oh, Mickey! When I hear you playing the harmonica, my heart sings!

— Minnie Mouse Mickey and Minnie might be fictional characters (you did know that, right?), but the quote itself has a ring of truth in it – the melodious tunes of the harmonica do tug at the heartstrings. The instrument made its early appearance in the United States before the Civil War, and soldiers on both sides of the conflict played it. In the 20th century, harmonica bands were a popular part of vaudeville acts. In the 1930s, an American musician Larry Adler performed with major symphony orchestras and became known as the world’s most skilled harmonica player . Later on, more harmonica enthusiasts, including 105 musicians who called themselves the “Largest Uniformed Harmonica Band in the United States,” brought this instrument into the mainstream. Since then, scores of famous musicians, including Aerosmith’s Steven Tyler, Bruce Springsteen, and Billy Joel, integrated the harmonica into their acts.  And Bob Dylan multi-tasked by placing the harmonica on a neck frame to free the hands for playing the guitar or piano at the same time.

It ain’t heavy, it’s the harmonica!

The only way I can play the harmonica is if I get my car going really fast, and stick it out the window.

This is how comedian Steven Wright described his attempts to play the harmonica.  Though the image of the harmonica sticking out the window of a moving car and making sound through the force of the wind is funny, we suggest that you choose a more conventional way of mastering this instrument – for example, with our Manhattan music lessons. Just call us and one of our harmonica instructors will come to your Manhattan, Brooklyn, or Riverdale home or office and teach you the “proper” way to blow the music into (and out of) this instrument – no fast driving required!

< Previous Post Face the Music, at Our NYC Music Lessons Next Post > “Trash Talk,” Brought to You by New York City Music Lessons