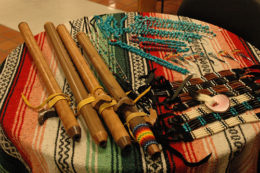 When you think about Thanksgiving, do images of a succulent Butterball turkey with all the delicious trimmings jump to mind?

To most people, that is what Thanksgiving is all about – good food, good company, a good football game and, of course, expressing gratitude for all of life’s blessings.

But wait. Have you ever thought about what our country was like when the Pilgrims landed at Plymouth Rock on a blistery December day in 1620? That historic event, and a harvest celebration that followed, eventually spawned the Thanksgiving holiday, as we know it today.

When the Mayflower docked and the colonialists disembarked onto dry land, they were met by Samoset, a Native American from the Wampanoag tribe. There was also Squanto, a member of the Patuxet nation, who helped the Pilgrims survive their first winter in the New World. By bringing the settlers corn and turkey, the locals had unwittingly started a Thanksgiving tradition that is still observed today.

Yes, Native Americans formed an early version of the “welcome wagon,” and yet their story is often left untold during the Thanksgiving celebrations.

When the Mayflower sailed to the New World, science, philosophy and the arts thrived in post-Renaissance Europe. Native Americans, meanwhile, lived in far more primitive and perilous surroundings.

Yet, they had their tribal music, which – no pun intended – played a major role in their religious and ceremonial rites. Unlike their European counterparts, who played (or listened to) music for the enjoyment, indigenous American music had a specific, utilitarian purpose, such as the healing of the sick, the bringing of rain, or the success in battle.

Drums, flutes, rattles, whistles, and other instruments were (and still are) routinely used, producing a plaintive and poignant sound.

Then, there are Native American songs, which – by our Western standards – may sound monotonous, flat, and even off-key. But that unusual sound reflects the true spirit of the indigenous people and the many struggles and hardships they have had to overcome in order to survive – all of which make the music so special.

For the past decade and a half, these unique sounds have been celebrated at the annual Native American Music Awards ceremony, which not only recognizes outstanding musical achievement among Native Americans, but also gives indigenous musicians a greater – and much deserved – exposure.

Have you ever wondered what our city looked like at the time of the Pilgrims’ arrival at Plymouth Rock? It certainly didn’t resemble the vibrant metropolis it is today. Called New Amsterdam at the time, it was a Dutch settlement and only the southern tip of Manhattan was inhabited. The rest of the territory that now forms New York City was wilderness where deer, bears, and coyotes roamed.

Aren’t you glad those days are over? Our NYC music teachers certainly are, because they go where no early settler had gone before – all over Manhattan, parts of Brooklyn, as well as Riverdale section of the Bronx. Needless to say, they wouldn’t want to encounter a coyote on their way to give an in-home or in-office music lesson because all they have to defend themselves is an instrument!

We mean it when we say that our Manhattan, Brooklyn and Riverdale music lessons are danger-free. Try us and see for yourself!