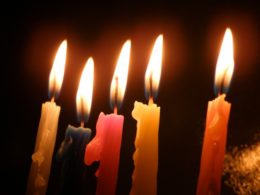 Wherever you happen to be during the holiday season, chances are you will be hearing plenty of Christmas songs. We bet you know most of the lyrics by heart and maybe you are even singing or humming along.

Are you as familiar with Hanukkah songs?

Celebrated this year from November 27th until December 5th, Hanukkah (sometimes also spelled Chanukah) celebrates the re-dedication of the holy Temple in Jerusalem after the victory over the Syrian-Greek invaders in 165 B.C. It also commemorates what many consider to be a miracle: when Judah and his followers entered the Temple, there was only enough oil to burn for one night, but it lasted for eight nights.

That’s why Hanukkah is called “the festival of lights” and is celebrated for eight days. That is also the reason why the menorah holds eight candles, and one is lit on each night of Hanukkah.

It is true that Hanukkah songs are not as generally well known as Christmas carols. But there are quite a few of them, each evoking a different mood, from serious and solemn to lighthearted and funny.

One of the more popular songs is called “I Have a Little Dreidel”, referring to a four-sided spinning top with a Hebrew letter on each side. It is an upbeat and melodious tune that is traditionally played during Hanukkah.

In fact, a dreidel is not merely a child’s toy, but a symbol of what Hanukkah stands for, as reflected in the lyrics of this song, entitled “Sivivon, sov, sov, sov:”

“Dreidel, spin, spin, spin.
Chanuka is a great holiday.
It is a celebration for our nation.
A great miracle happened there.”

Another solemn song, which evokes the historical importance of Hanukkah, is called “O Rock of My Salvation” and goes like this:

“Restore the Temple where we will bring offerings.
When you will eliminate our enemies,
Then I shall sing at the rededication.”

Hanukkah can be cheery too!

Just as some of the Christmas songs are funny or at least light-hearted, so is a least one Hanukkah song that we know of. It’s called, appropriately enough, “The Hanukkah Song,” and was written and originally performed by comedian Adam Sandler, and later recorded by Neil Diamond.

This song goes to prove that even the most serious of commemorations which, like Hanukkah, are filled with deep historical significance, can have a touch of levity!

Let us do the walking (through the snow)

First things first: we don’t know how to spin the dreidel (though we can probably learn), but we do have experience in teaching all kinds of music – spiritual, secular, and anything in between.

Our Manhattan music lessons cover all kinds of instruments, as well singing and songwriting. And good news is that you don’t have to trudge with your tuba or upright bass through snow and sleet – we’ll come to you and give you lessons in the comfort of your own home or office.

So when you are done celebrating your eight nights of Hanukkah or 12 days of Christmas, give us a call!