Get to Know Instruments of the Future, at Brooklyn Music School 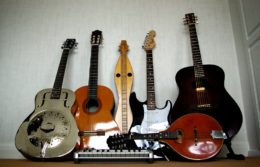 With Brooklyn Music School, The Future is Now!

Are you one of those people who believe in the saying “there is nothing new under the sun” or “everything that can be invented has been invented?” We hope not, because new things are being created every day, proving that there is plenty of new stuff under the sun (or at least on this earth).

Obviously, we can’t list all the inventions here and now, so let’s focus on just one category, which should come as no surprise to anyone: musical instruments. As much as we love the existing instruments, we are always excited to hear about all the cool ones that are being created.

The shape of things to come

Last month, scores of new instruments were unveiled at the annual National Association of Music Merchants (NAMM) exhibit held in Anaheim, CA. Some truly interesting inventions were presented. Are they really new and different? NAMM President and CEO Joe Lamond says they are: “Some products at the NAMM Show are so beyond the cutting edge they’re on the bleeding edge!” You be the judge – here are some of them (and we hasten to add that this is in no way an endorsement of any kind; we list these instruments here for informational purposes only). Electric violins: Yamaha’s YEV violin series features an all-wood construction, instead of plastic or other material, and a sleek design. 660 Guitar: A 7-pound guitar made entirely of aircraft aluminum with a carbon-fiber neck, the company’s guitar is practically indestructible and, according to its manufacturer, 660 Guitar, its sound is just as good as any high-end wooden guitar. Occulus Rift Virtual Reality Drum Set: Air-drumming instrument uses that uses a computer and motion-capture technology to create a functional-but-invisible drum set. But while we marvel at all these super-duper inventions, let’s not forget that the musical instruments, which are now considered as “conventional” were once, in centuries past, just a vision or an idea in their inventors’ minds.

Back to the basics

It’s always fun to see what the music industry comes up with in way of new instruments and gadgets. We like to see what the future holds, though it is impossible to predict which novelties will become part of the mainstream. Perhaps back in 1700, musicians also wondered whether the new-fangled instrument known as the pianoforte, invented just that year by Italian craftsman Bartolomeo di Francesco Cristofori, would ever replace the harpsichord? This is what we do know: at Hey Joe Guitar, we teach the instruments that have been around for a long time: the guitar, piano, violin, flute, and many others. Whichever of the (already existing) instruments you’d like to learn, one of our teachers will come to your Manhattan, Brooklyn, or Riverdale home of office to give you as lesson!