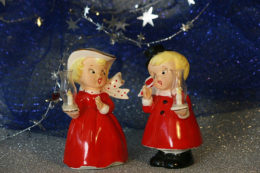 ‘Tis the season of “fa la la la la, la la la,” and chances are you too are belting out, or at least humming to, some Christmas tunes. Whether it’s about rocking around the Christmas tree, decking the halls with boughs of holly, riding through the woods in a one-horse open sleigh, or poor grandma getting run over by a reindeer, these traditional songs are an integral part of the holidays.

But wait: have you ever wondered what interesting and maybe even wacky tales are behind the most popular Christmas carols? No? Well then, read on…

Sure you know all the seasonal standards, but – do you REALLY? Here’s a list of some curious facts about Christmas music you may have missed along the way:

Christmas is a Christian holiday, but many of the most popular tunes are the creation of Jewish songwriters and composers. For example, the music and lyrics of “White Christmas,” the most recorded Christmas song in history, were written by Irving Berlin.

Johnny Marks was the prolific songwriter of “Rudolf The Red-Nosed Reindeer”, “Rockin’ Around The Christmas Tree” and “Run Rudolph Run”

And don’t think that Jewish composers are behind only the 20th century’s crop of songs – the music to “Hark the Herald Angels Sing”, was composed in 1840 by Felix Mendelssohn. In fact, there is something very interesting about this particular piece of music. Read on to find out!

Stories behind the songs

“Hark the Herald Angels Sing” has been a traditional Christmas carol for more than 170 years, but Mendelssohn actually composed this cantata – to the lyrics written in the previous century by a Methodist cleric Charles Wesley – to commemorate Johann Guttenberg’s invention of the printing press. Why a prominent composer would mark an invention that had occurred 400 years earlier with a religious song, we do not know. But whatever the reason is, we are happy that he gave the world this wonderful carol, which is still a part of Christmas repertoire all these years later.

Hang on – there are more fascinating facts out there. For instance, “Jingle Bells”, one of the most popular holiday songs, is not about Christmas at all; it was originally written for the Thanksgiving celebrations.

Another typical song is “Do You Hear What I Hear?” You’d THINK it’s a Christmas tune, but in reality, it is a peace song, inspired by the 1962 Cuban Missile Crisis.

And there is a sweet “awwww” moment associated with the above-mentioned “I’ll be Home For Christmas:” Gemini 7 astronauts Frank Borman and Jim Lovell asked to have this song played for them while they were in space. Their wish did come true: they returned to Earth on December 18, 1965, after two weeks spent in orbit.

Comfort and joy – in your home

We are happy to share with you all these fascinating tidbits and hope they have inspired you to further explore the world of music – Christmas and otherwise. Do you want to be a little drummer boy (or girl)? Or perhaps you’d like to start guitar or piano lessons or, for that matter, learn to play any other instrument in the convenience of your own home or office?

Contact us and one of our wonderful NYC music teachers will appear at your doorstep, whether you live in Manhattan, Brooklyn, or Riverdale. With music in your life, you’ll never have a “Blue Christmas!”

Photo by The Dolly Mama