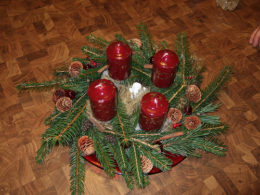 It’s that time of the year again – Christmas spirit is in the air. With Thanksgiving over, the holiday season is officially under way.

But before you start thinking about all the festivities, there is another celebration that is perhaps lesser-known in this country, but nevertheless very important in the Catholic and other Christian churches: the Advent. It starts four Sundays before Christmas and this year falls on December 1. (The Eastern Orthodox Church observes a similar season from November 15 until Christmas).

The lead-in to Christmas

Simply put, Advent is the new year of the Christian church, a time of preparation for Christmas and the celebration of Christ’s birth. It is, therefore, a time of spiritual reflection and anticipation – an aspect that is often forgotten in the pre-holiday frenzy of shopping, eating, and other merrymaking

It is not certain when exactly Advent observances had begun, but historians believe it was in the 4th century. At that time, it was considered to be a time for Christians to devote themselves to prayer and fasting.

While the churches mark this liturgical observance, it is not perhaps as common among families in the United States as it is in Europe and other parts of the world, where Advent is viewed as an integral part of the Christmas season.

There are two Advent traditions that are observed in many homes: the wreaths and calendars.

The advent of Advent

The origin of Advent wreaths can be traced to folk traditions of northern Europe, where people lit candles on circular arrangements of evergreen branches, bringing light and warmth to the darkest and coldest nights of winter.

To this day, wreaths are an important part of Advent observances, with candles lit on each of the Sundays leading up to Christmas Day.

What about the calendars? They first appeared in Germany in the 19th century and quickly spread across Europe and North America. This calendar has 24 small doors (representing the December days preceding Christmas), which are opened by children every morning.

In the early versions, the doors opened to reveal images from the Bible. These days, however, most Advent calendars have no religious content and often contain pieces of chocolate.

We can’t talk about the Advent without mentioning the music (especially since we are a music school!)

We all know Christmas carols and other traditional holiday tunes, but what about the Advent songs?

As you can imagine, most of them are, for obvious reasons, religious in nature, such as “O Come, O Come, Emmanuel,”

“The Angel Gabriel,” http://www.youtube.com/watch?v=pliqObTHxUQ and “Waiting in Silence”

But there are also plenty of other songs that are a good fit for this holy season. Here are just some of them:

“Breath of Heaven” by Amy Grant

“Here With Us” by Joy Williams

and, for a lighter and more upbeat tune,

“Getting Ready for Christmas” by Paul Simon

Get ready for Christmas

Whether you want to learn to play Advent songs, or any other kind of music on any instrument, our NYC music school is the right fit for you or your child.

Hey Joe Guitar’s excellent teachers will brave the cold of December and come to your Manhattan, Brooklyn or Riverdale (Bronx) home or office to give you lessons.

So – light the candles on your wreath and start your lead-in to Christmas with beautiful music!