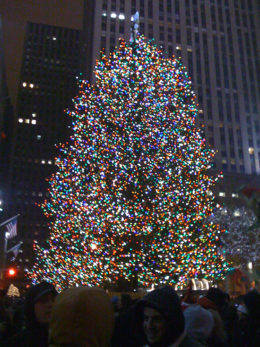 During the holidays, a magical, fairylike aura envelops New York – from downtown to uptown, from East River to the Hudson, the city sparkles and glows.

NYC has many cherished holiday traditions: Santa’s arrival at Macy’s Thanksgiving Day Parade, the NYC Ballet’s performance of “The Nutcracker” at Lincoln Center, the train show at the Botanical Gardens, and lots of others.

But among the best-known NYC holiday traditions are those that take place around Rockefeller Center – the lighting of the gigantic Christmas tree and Radio City Music Hall’s Christmas show.

Every December for the past 83 years, a giant Christmas tree has been overlooking Rockefeller Center, its tens of thousands of lights twinkling amid snow flurries.

A symbol of holiday joy, the tree was actually borne out of grim circumstances: on Christmas Eve 1931, in the midst of Great Depression, a group of construction workers put up a 20-ft. tree on the muddy site of what would soon become one of the city’s best-known landmarks: the Rockefeller Center.

Over the years, through good times and bad, the tree has morphed from a humble fir to a magnificent Norwegian spruce that reaches the heights of between 70 and 100 feet. From the first days of December to the first week in January, the tree – which, these days, is decorated with energy-efficient LED lights – is a symbol of what a NYC Christmas is all about: joy, hope, and goodwill.

Just around the corner is another landmark associated with a cherished holiday tradition: Radio City Music Hall’s annual Christmas show.

Just as the tree, the theater too was erected during the Depression and opened for its first show on December 1932. (Interestingly enough, the area around the Radio City and Rockefeller Center, now a prime piece of real estate, was known back then as “the speakeasy belt”).

Today, it is the largest indoor theatre in the world – its marquee is a city-block long, its auditorium measures 160 feet from back to stage, and the ceiling reaches a height of 84 feet.

Since the day it opened, Radio City became home to the legendary Rockettes and its “Christmas Spectacular” extravaganza, a mega-show attended by more than 1 million people annually. Some elements of the production have remained the same since the beginning, such as Parade of the Wooden Soldiers and the Living Nativity scene .

Festive music lessons – all year round!

As New Yorkers we are really lucky to be surrounded by all this holiday spirit. Likewise, we should not take for granted all the wonderful concerts and other performances our city has to offer – at Christmas and year round.

We at Hey Joe Guitar are happy to be part of New York’s vibrant music scene and to have such talented teachers of the guitar, piano, and many other instruments in our midst. We love sending just the right teacher and instrument to your Manhattan, Brooklyn, or Riverdale home or office, and spreading good cheer all year round!