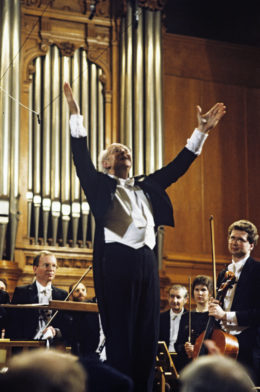 If you have ever attended symphony orchestra performances, you know that the music doesn’t just “play itself.” Someone is responsible for ensuring that all the different instrument sections are balanced in the overall sound, so that a concert goes off without a hitch. We are talking here about conductors, sometimes also called “musical directors.” They have been around for centuries, so they are a familiar sight to concert goers everywhere, but have you ever wondered what their role is? Obviously, it goes far beyond just raising and haphazardly waving their batons.

Simply put, their role is to help musicians play well together, but, as you can imagine, the task is much more complex than that.

Not just a magic wand

You may not have given much thought to the conductor’s role, but you’d probably notice his absence. That’s because without a leader, individual musicians in large symphony orchestras would have to use their own judgment – for example, on how to interpret a particular score – and the result might be uncoordinated and awkward. Of course, there are exceptions to that rule as well ! Very likely, these ensembles rehearsed with the conductor and performed in concert without one. In a way, a conductor is like any other team leader – in business, sports, or any other environment. He or she has to make sure that everyone in a group is in sync with each other. In music, this literally means being in tune and harmony! What the audiences usually see is a well – no pun intended – orchestrated performance. This means that in rehearsal, the conductor put in a lot of work to ensure coherence and coordination among musicians. What exactly does this entail? According to Wikipedia, “the primary duties of the conductor are to unify performers, set the tempo, execute clear preparations and beats (meter) and to listen critically and shape the sound of the ensemble.” That’s just a general definition of a conductor’s job, but there’s much more involved. For instance, through gestures, a conductor communicates instructions to the musicians, directing them when to start or stop, how fast to go, when to play louder or softer, etc.

Over the years, there had been many famous composers who conducted their own orchestras – like Bach, Beethoven, Berlioz, Mendelssohn, Wagner, Mahler, Strauss, and Rubinstein to mention just a few. Other prominent conductors included Arturo Toscanini, Herbert von Karajan , Leopold Stokowski, and Claudio Abbado , among others. Each and every one of these brilliant conductors took the performances to the new level and delighted audiences with their mastery. At Hey Joe Guitar, we don’t conduct orchestras. However, our New York City music teachers are skilled at guiding their students through all the intricacies of music – whatever the instrument. When we come to your Manhattan, Brooklyn, or Riverdale home or office, we’ll make sure you play with harmony, balance, and coordination.