When it Comes to Music, NYC Guitar School Does the Math 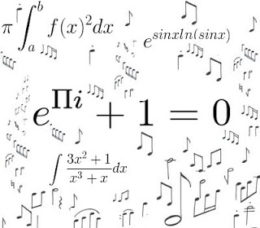 You probably know that learning to play an instrument is not exactly rocket science. We think of music as an artistic, rather than scientific, endeavor, one that “plays on” our senses.

Math, on the other hand, does not involve emotions; it is all about logic, as well as analytical and abstract reasoning. So the two fields are totally incompatible, right?

Actually, that’s not a correct assumption. In fact, the two fields are connected to each other in fundamental ways. That’s because music depends on numerical relationships, arithmetic, geometry, and symmetry.

Does this mean that if you are a gifted musician you are also good at calculus, algebra, and arithmetic (and vice-versa?) No. You could be a mathematical genius and not be into music at all, but if you play an instrument, you are also a mathematician of sorts, even though you probably don’t think of yourself as one.

The connection between music and math is not a new discovery. Ancient Greeks were aware of it, and classical composers used mathematical structures in their music.

What’s the “common ground” between the two fields? Both are based on patterns, structures, and numbers. For instance, a musician will “measure” notes (determine the number of beats) and fit them into the sequence where they belong; a mathematician will do the same calculation when figuring out equations. In other words, behind the sound of the notes you hear are both simple and complex mathematical concepts.

Here’s a good example of how music and math overlap: musical rhythms are also mathematical equations, such as 4/4 or 2/4 time. When you play, sing, or write music, you are also crunching numbers – you are wondering, “how many more beats do I need?”

Any part of music you can think of – harmony, chords, scales pitch, and tone – has a mathematical component in it.

The sound of numbers

As mentioned above, classical composers were no strangers to math – for instance, they used fractions to divide a musical whole note into parts (halves, quarters, eighths, and sixteenths).

You may already have affinity for math and not even know it: research has shown that people are more attracted to music that has clear mathematical structure. One notable example is Pachelbel’s Canon in D. Bach’s works like Canonic Variations also show the composer’s fascination with numbers.

What about modern music? You may not be a fan of hip-hop lyrics, but the music’s stylized rhythms have a clear mathematical pattern. As a matter of fact, some school teachers use (appropriately worded) rap songs to help their students learn algebra.

We won’t tell you that all our teachers are math geniuses – they are not. But they certainly can put two and two together and know everything that pertains to an instrument of your choice. So in the end it all…adds up.

Please contact us to set up a music lesson in your Manhattan, Brooklyn or Riverdale home or office. It really is as simple as 1,2,3!