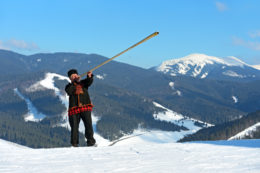 When you are going to a concert you probably expect to be seated in an appropriate venue. We are guessing that very few people anticipate listening to a live musical performance while swimming in a pool or skiing down a slope.

But this is not always the case: some musicians like to play in unusual and surprising venues, places where you would not normally expect to hear a performance. That’s okay with us though – we believe music should have no boundaries or be defined by social conventions. Let’s have a look at some creative – and sometimes wacky – places around the world where music is being played!

Over in Europe, a British company called Wet Sounds had a genial idea to set up musical installations in public swimming pools. As explained on its website, Wet Sounds “presents listening sessions to a floating and diving audience in the water. It effectively creates three sound spaces in the physical space of the swimming pool. One inside the water, one outside the water and one a merger of the two as the listener floats on the surface of the water. These three distinct sound spaces are chosen by the listeners as they move in and out of the water. The three sound spaces are used to convey parallel narratives, musical and literal.” What does music sound like under water? This BBC report provides the answer. Now, you don’t have to get wet to hear music in offbeat places – just bundle up! A couple of years ago a ski enthusiast named Sean Pawling hit the slopes of a Northern California ski resort and slalomed down while playing “Ride of the Valkyries,” from the movie “Apocalypse Now” on his trombone. He certainly brings a new meaning to the phrase “The hills are alive with the sound of music!” And speaking of taking music to the new heights, sky’s the limit for this adventurous fellow , who decided to play his violin while skydiving. However, unless you are a very skilled skydiver and violinist, and your instrument is well insured, we advise you against such daredevilry!

We’ve heard the song about being in a desert with a horse with no name , but we bet that most of you have never seen this stunning footage of a female ensemble performing in a Mongolian desert. And, unlike the horse, the instrument does have a name: shanz, a long-necked spiked lute with an oval wooden frame that sounds somewhat like the banjo. Also going by the name “shudraga,” it is traditionally used in the Mongolian folk music (though not necessarily in the desert). Now, if you think a concert hall smells “fishy,” you may be right, especially if you happen to attend a performance by an Icelandic musician Sigur Ross, who decided to play with his group in a deserted fish factory . Can’t decide which music venue is the most unconventional for an instrument? This fellow solved it: he takes his long-suffering cello with him everywhere! Should you do the same? As in the case of a parachuting violin, we recommend that you first insure your poor instrument against all kinds of knocks and blows!

We’ll meet you in New York!

We are sure you already know this, but we repeat: our music lessons take place in conventional and traditional venues like your home or office. Our teachers won’t go to a fish factory or a desert, but they WILL go to Manhattan, Brooklyn, and Riverdale – locations that are more convenient for our customers. So if you’d like to venture to Iceland or Mongolia, call the airlines. But if you want to stay city-bound, contact us!