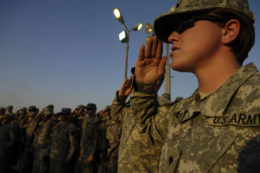 Two days from now, on November 11, we will celebrate Veterans Day, which honors US veterans past and present. We salute them and thank them for their service. Like cities and towns across America, New York will hold its own parade – the largest celebration of veterans in the country. Every year since 1919, when the 369th Infantry – just back from fighting in WWI – proudly marched up Fifth Avenue, thousands of veterans and other participants re-trace the same route.

This year’s parade will commemorate the 70th anniversary of the end of World War II, and the 25th anniversary of Desert Shield. We think one of the best ways to remember the sacrifices of our veterans is to look back at the music that accompanied them into the battlefield. From the bugles, pipes, and drums of the Civil War to the protest songs of the Vietnam era, the music has been an important part of American history.

At 239 years, America is a relatively young nation. The first armed conflict it engaged in was the one that actually served to lay the cornerstone of our country – the American Revolutionary War, which lasted from 1775 to 1783. Of course, there are no original recordings of any pieces of music from that era (or until WWI, for that matter), but we do know that one of the most popular songs at that time was “Ballad of the Green Mountain Boys.” During the Civil War (1861 – 1865), the only other battle that was fought on American soil, “The Liberty Song,” originally written in 1768 by Founding Father John Dickinson, was popular, as was “When Johnny Comes Marching Home,” And then there was the famous Confederate tune “I Wish I Was In Dixie Land.” By the end of the 19th century, there was another conflict involving the United States – Spanish American War. Even though short-lived (from April to August 1898), it produced patriotic music by John Philip Sousa, such as “Hands Across the Sea.” In the next century, WWI spawned a number of songs, several of which were written by George M. Cohan, including “Over There.” During WWII, Big Band music got the civilian population dancing, but the soldiers fighting overseas were not forgotten. “Remember Pearl Harbor” and “I’ll Be Home for Christmas” were big hits. Unfortunately, WWII was not the last conflict of the 20th century. The Korean War of the 1950s sparked songs like Jimmie Osborne’s “Victory in Korea” and Wilif Carter’s “Good-bye Maria, I'm Off to Korea.” “Ballad of the Green Berets” was released at the height of Vietnam War in 1966, followed, three decades later, by “God Bless the USA” during the years of the first Gulf War.

Patriotic spirit right in your home

The above-mentioned songs are just a few of many written and performed during various wars. We can only hope that these tunes had provided moral support and some pleasure to our soldiers. You too can learn to play or sing any of these songs. Just get in touch and one of our teachers will march right into your Manhattan, Brooklyn, or Riverdale home or office to give you lessons.

< Previous Post New York Guitar School Will Never Stress You Out Next Post > At Brooklyn Guitar School, Music is Unforgettable