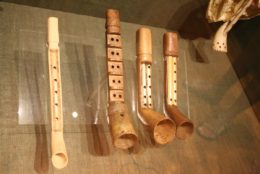 At Hey Joe Guitar, we live in the present. We don’t spend much time dwelling over the past, but we do sometimes look back at certain aspects of history, especially those pertaining to music.

By the same token, we often wonder what the future holds. We don’t have a crystal ball, of course, but we are curious about what new music-related developments are ahead.

We thought this would be a good opportunity to explore the past and future world of musical instruments – the ones that no longer exist and those that haven’t been popularized yet.

So come on board our time machine and let’s go for a ride!

A great number of instruments invented in centuries past are still in use today, even though they had been modified and modernized in the meantime. However, some are no longer in existence.

Obviously, we can’t mention all of them here and now, but let’s have a quick look at some musical relics of the past:

As we said, it is impossible to cover all the extinct instruments here, but at least you have a quick overview of some of them.

Obviously, we cannot predict the future – musical or otherwise. (As Doris Day famously sang: “Whatever will be, will be. The future’s not ours to see.”)

However, this article is giving us a glimpse into what instruments might be developed.

Among them are some truly imaginative ones, like GEPS, a “data glove” that lets the wearer create electronic music with hand gestures; the tine organ; and even something as unusual as the sponge.

Of course, all these (and other) instruments are bound to create new sounds, or at least change the ones we are used to hearing. What will the music of the future sound like? Again, we can only guess, but perhaps this video will provide some answers.

We have some great and not-so-great news. Let’s start with the latter: as talented as our teachers are, they cannot give you lessons in instruments that no longer exist or those that haven’t been manufactured yet.

Now for the great news: if an instrument has already been invented and is in use – like the guitar, piano, drums, and many others – you came to the right place. We offer lessons in a wide variety of string, woodwind, brass, and percussion instruments, and give voice training as well.

Just contact us and we’ll send a terrific teacher to your Manhattan, Brooklyn, or Riverdale home or office.

Isn’t it wonderful to be living in the present?

< Previous Post A Different Kind of Tune: Manhattan Guitar School “Dives” Into Underwater Sounds Next Post > With the Guitar, You Can Be All Fingers and Thumbs!