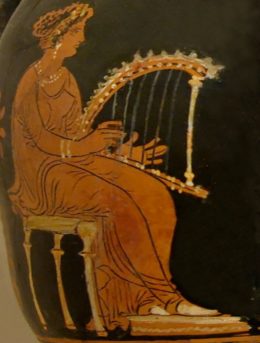 Learn About the Sounds of the Past, At Manhattan Music School

Recently we wrote about some musical instruments of yore that no longer exist The question is: are they lost forever or is there a way to bring them back to life?

We are happy to tell you that modern technology is doing wonders in reconstructing the sounds of some ancient instruments that had not been heard in hundreds – and in certain instances even thousands – of years.

One such long-lost marvel is the epigonion, a stringed, harp-like instrument that was popular in ancient Greece. It had disappeared with the fall of the Greek Empire, as had other once-common instruments like the salpinx (a kind of ancient trumpet), the barbiton (a bass guitar), the aulos (an oboe), and the syrinx (a pan flute). But in recent years they had been painstakingly recreated based on archaeological data such as excavated fragments, pictures on ancient urns, and other historical records.

The fact that these long-lost relics of past civilizations had come to life again is due to the cutting-edge technology, as well as a team of dedicated researchers, historians, physicists, archaeologists, engineers, and musicians.

As you can imagine, a lot of work is involved in this process, but it is all worth it in the end, when an ensemble of professional musicians, appropriately called the Lost Sounds Orchestra, gives a concert using the reconstructed instrument. This really brings a new meaning to the phrase “everything old is new again,” doesn’t it?

So what do they sound like? Truly beautiful! It really is a special experience to listen to instruments that had not been heard, literally, in ages .

It’s not lost on us!

At Hey Joe Guitar we are excited to know that (some) old instruments never die – they spring to life again thanks to the convergence of science, technology, and human creativity. You might say that these long-forgotten instruments are getting a second wind!

Now, as amazing as our teachers are, they are the first to admit that the epigonion, salpinx, barbiton, aulos, and syrinx are…all Greek to them. However, they can certainly come to your Manhattan, Brooklyn or Riverdale home or office and teach you to play the modern versions of these ancient instruments: the harp, trumpet, bass guitar, oboe, and flute.

Let’s put it this way: with our music lessons, you’ve got nothing…to lose, and everything to gain.