Brooklyn’s Park Slope: It’s Not All Downhill From There! 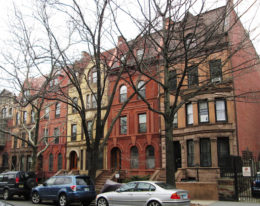 First things first: no, you can’t do downhill skiing in Brooklyn’s Park Slope. As most of NYC’s urban neighborhoods, Park Slope is predominantly flat. Its name derives from its location on the western slope of Prospect Park, a 585-acre oasis of greenery in the midst of New York’s most populous borough.

Now that we’ve cleared this up and you have put away your skis, let’s explore Park Slope’s nooks and crannies, and discover what this neighborhood has to offer. The answer is: a lot! That is why quite a few accolades have been bestowed on this area. For example, in 2006, Natural Home magazine named Park Slope one of America’s ten best neighborhoods based on criteria including parks, green spaces, farmer’s markets and community gardens. The following year, the American Planning Association praised Park Slope for “its architectural and historical features and its diverse mix of residents and businesses, all of which are supported and preserved by its active and involved citizenry.” But that’s not all: in 2010, the neighborhood was ranked number one in NYC by New York Magazine for its quality public schools, dining, nightlife, shopping, access to public transit, green space, quality housing, safety, and creative capital. So it’s unanimous: Park Slope is one great neighborhood!

Bounded by 15th Street to Flatbush Avenue and Prospect Park West to Fourth Avenue, Park Slope is a family-friendly neighborhood with many tree-lined streets, historic brownstones, as well as numerous bars and restaurants. You may not think of Park Slope as exceptional in any way –despite all the aforementioned accolades – but the fact is that in 1974 it was designated as one of New York’s largest landmarked districts. However, it wasn’t always this way. In the first half of the 20th century, Park Slope suffered the same fate as many other inner-city neighborhoods: decay, disrepair, and subsequent decline. However, in the 1960s, some visionary residents who moved into this area spearheaded an effort to preserve Park Slope’s historic charm, and to turn it into a welcoming and livable neighborhood. Today, this area boasts about 1600 architecturally interesting buildings, including the Montauk Club at 25 Eighth Avenue, which was designed in Gothic style popular in the 15th century Venice. There are also a number of Romanesque Revival and neo-Classical row houses, as well as some stately Victorian brick and brownstone mansions that were built at the end of the 19th century. This is how architectural historian and Columbia University professor Andrew Dolkart described Park Slope: “No neighborhood in America has a finer and more intact collection of late 19th-century row houses. Block after block is virtually unaltered, with houses ranging from grand townhouses designed by Brooklyn’s leading architects, to long rows of vernacular speculator-built housing designed by the obscure architects who provided character to so many urban neighborhoods.”

A tree grows in Brooklyn

We can’t talk about Park Slope without mentioning its vast green spaces. First thing that jumps to mind is the Prospect Park, second in size only to Manhattan’s Central Park. Because it is home to the last remaining natural forest in Brooklyn, the park has 30,000 trees, both landscaped and wild. Streams, waterfalls, and a 60-acre lake add to the park’s beauty. And let’s not forget a Farmer’s Market, free concerts, and other events that take place in this vast oasis. And speaking of greenery, Park Slope is also the location of the Brooklyn Botanic Garden, which, like Prospect Park, is a wonderful place of rest, relaxation, as well as various nature-related activities that the whole family can enjoy.

Yes, this is the title of Neil Diamond’s autobiographical song about the borough he was born in. No Park Slope roads are off limits to us, which is why our Brooklyn music lessons teachers will be happy to come to your Park Slope home or office and teach you to play any instrument. No skis required!

< Previous Post Upper East Side: The River (Almost) Runs Through It Next Post > Make a Difference, With Manhattan Music Lessons