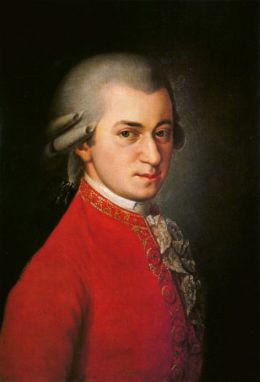 Two days from now, classical music lovers will celebrate a momentous event. January 27 will mark the 260th anniversary of the birth in 1756 of Wolfgang Mozart, one of the greatest composers of all time. Born in Salzburg, Austria, Mozart was a child prodigy, who started to write music at the age of four, and composed his first minuet a year later.

By the time he passed away in 1791, he had composed 600 works – about 17 pieces a year. They include numerous symphonies, piano and violin concertos, and operas, such as “The Magic Flute ,” ”The Marriage of Figaro,” and “Don Giovanni.” Let’s have a look at some interesting facts about this musical genius.

These are just a few facts about the great composer. We can’t shed any more light on his life or death, but what we CAN do is send one of our amazing teachers to your Manhattan, Brooklyn, or Riverdale home or office for a lesson. Of course Mozart – and classical music in general – is not the only genre we teach. We also offer lessons in other styles of music, like jazz, rock, blues, and many others. So contact us and we’ll get you set up!

< Previous Post New York Music Teachers are Mishap-Free! Next Post > Upper East Side: The River (Almost) Runs Through It