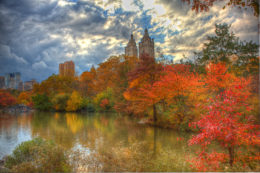 Brooklyn Piano School Will Get You In Mood for Autumn

Autumn in New York, as Frank Sinatra famously sang, is “so inviting.” He was right, of course. There is something special about this season. Yes, it’s sad to say goodbye to the sunny and warm days of summer , but early fall in New York is usually lovely as well. Trees in Central Park and other green spaces in the city are “dressed” in eye-popping colors of yellow, orange, and red. And the freshly fallen leaves emit a subtle, earthy scent into the crisp air.

As the 19th century English poet Percy Bysshe Shelley so beautifully wrote, “There is a harmony in autumn, and a luster in its sky.” Is it any wonder that the beauty of the fall season has inspired not only poets, painters, and other artists, but also many composers and songwriters? Let’s listen to some pieces of music inspired by colors, scents, and the mood of the autumn.

At the beginning of the 18th century, Italian composer Antonio Vivaldi wrote four violin concertos, which turned out to be his most famous work. Titled “The Four Seasons,” it included the very beautiful autumn concerto . A century later, Austrian composer Josef Strauss wrote a waltz entitled “Autumn Roses” . Another beautiful waltz celebrating the fall season, aptly named “Autumn Dream” was composed by a 20th century British composer Archibald Joyce. What about autumn songs? Speaking of waltzes, listen to Tony Bennett’s 1956 rendition of “The Autumn Waltz” . Of course, one of the most famous fall songs of all time is a 1945 classic written by a Hungarian composer Joseph Kosma and called “Autumn Leaves.” It was recorded in both English and French . There is also Neil Young’s “Harvest Moon” , U2’s “October” , and many others. Which of the above pieces of music inspires you the most?

We hope all these compositions will motivate you to start making some music of your own. A great thing about music lessons is that you can begin them at any time of the year – in other words, music is always in season! Thankfully, our teachers are not just fair-weather friends; even when it rains and the temps drop (as often happens in the fall), they will still …waltz into your Manhattan, Brooklyn, or Riverdale home or office. So don’t wait until fall turns into winter – contact us while the leaves still have their radiant color!