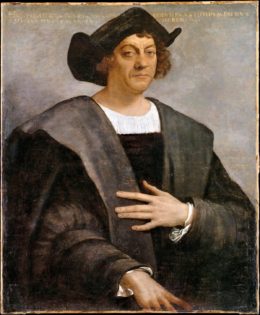 On August 3, 1492, Italian explorer Christopher Columbus set sail from the Spanish port of Palos. He was in command of three ships – the Santa Maria, the Pinta, and the Nina. The goal of this historic journey was to find a new sea route to China, India, and other parts of Asia.

More than two months later, on October 12, Columbus’ ships found the “New World” – the Bahamas and other Caribbean islands. But despite the myth that had persisted for hundreds of years, Columbus didn’t “discover” America — in fact, he never set foot here. Of course, in the 15th century, America was already settled by Indians; historians are not sure who actually discovered the continent, but we do know it was named after another Italian explorer, Amerigo Vespucci. Still, October 12 is observed in the United States as Columbus Day, which celebrates the contributions Italian immigrants have made to our country.

Music of the Renaissance

There are some songs that commemorate Columbus’s discovery of the New World . They are decidedly modern, but what about the music that was in vogue in Columbus’ home country of Italy, as well as in the rest of Europe, during his lifetime? The music of the Renaissance era is not as widely known to us as the styles that developed in the next century. Baroque had given us Johann Sebastian Bach, George Handel, and Antonio Vivaldi, whose music is still played and loved to this day. But that is not to say the Renaissance compositions are not worth listening to. A lot of the music from that period, both religious and secular, is based on modes, has a rich texture, and harmony . Among the most popular Renaissance instruments were the cornamuse, cromorne, shawm, clavichord, and virginal. None of them is still commonly used; the only instrument of that era that remains popular to this day is the recorder. We have no idea whether Columbus listened to music while he sailed the ocean blue, or, for that matter, whether he was a music aficionado. But we do know that the music played in churches and royal palaces during his lifetime was really beautiful! That’s the kind of music Europeans were fond of. But what about the inhabitants of North America, which Columbus allegedly discovered? Native American tribes of the 15th century were quite evolved and their music often included drums, rattles, flutes, wood whistles.

As we said, Columbus Day is a holiday in the United States, a celebration of the rich Italian heritage. In New York, where approximately 1.8 million people of Italian descent live, a parade takes place today (as it does every year) along Fifth Avenue. As always, it’s lots of fun! Even if he didn’t actually discover America, Columbus still went down in history as an explorer and an adventurer. Learning to play a musical instrument is also an adventure of sorts – your curiousity will help you discover new sounds and other musical elements that you never knew before. That’s where our teachers can help. When they come to your Manhattan, Brooklyn or Riverdale home or office, your music lesson will be smooth sailing!

< Previous Post Get Ready for Your Lessons, With New York Music School Next Post > “Fall” Into Music, With Brooklyn Piano School