Do You Hear What We Hear? Five Things You May Not Know About Christmas Music 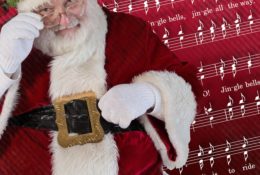 It’s “that” time of the year again: holiday season is upon us and Christmas music resounds almost everywhere around us.

You know the titles and melodies of these songs, but you may not know that many of them have very interesting histories.

So let’s look at five fascinating facts about the most popular holiday tunes:

Are you tired of hearing the same old holiday tunes all over again, yet want to continue to enjoy the holiday spirit they impart? No problem. Some old classics have been updated in recent years, and we hope they will bring you much comfort and joy.

With music in our hearts, we’d like to wish our students, their families, and everyone else, very happy holidays!

< Previous Post Five Reasons the Saxophone Rocks, Rolls, and Jazzes Up the Music World Next Post > Five Reasons Why Music Rules in 2018!