A « Deadly Pursuit ? » Music That Got a Bad Rap 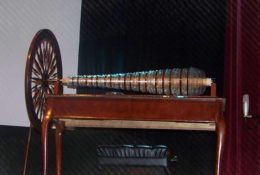 November is usually not the best month in NYC: it’s cold and grey and generally « blah. » So we thought we’d lift your spirits with a really fun blog.

t the risk of shooting ourselves in the foot but in the interest of full disclosure, we are telling you here that some historical evidence shows musical instruments to be harmful and even deadly.

Yes, you heard us right: HARMFUL AND DEADLY.

American inventor Benjamin Franklin was a very clever man and one of his creations was a musical instrument he called “glass armonica” — a series of glass bowls of different sizes that produced beautiful sounds. The instrument became popular across the big pond, where Mozart and Beethoven composed music for it.

But some doctors of yore insisted that listening to it could kill women and anyone else who had fragile disposition. In other words, according to the 18th-century physicians, glass armonica was an instrument…of torture, affecting the nerves and causing a multitude of health problems.

According to a recent article on this subject, “in 1808, people attributed the death of armonica virtuoso Marianne Kirchgessner to the instrument’s eerie tones. Some psychiatrists went so far as to say it drove listeners to suicide.”

Eventually, as the article points out, this instrument “was relegated to the great big concert hall in the sky.”

You’d think people had wised up in the 19th century but even then, some medical professionals and scientists insisted that listening to music in general (and not just to glass armonica) was a potentially deadly pursuit.

No longer considered to be dangerous to our health, music is a big and important part of our lives — in a positive way, of course. In fact, we now know for sure that it has numerous benefits on our physical and emotional wellbeing.

And we also know that no instrument could cause you any bodily harm — unless, of course, you try to swallow your flute or attempt to carry your grand piano on your back.

So we hope you will not be discouraged by the warnings of the 18th-century doctors and give musical instruments a chance!

< Previous Post Comfort and Joy Are Not Just for Christmas Next Post > The Most Wonderful Time of the Year: We Reveal the “Secrets” Behind Holiday Classics