A Clean Bill of Health, With Brooklyn Music Lessons 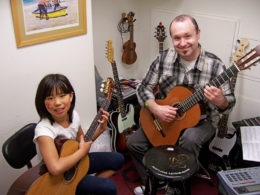 Oh, what a difference a few centuries make! Today, we know for a fact (having had abundant scientific evidence as proof) that music is good for humans, animals, and other living things as well. However, it has not always been like this. As a recent article in the Smithsonian magazine tells it, some 19th century physicians thought music could actually infect the brain!

As a matter of fact, there are many instances throughout history when medical profession warned the public about the dangers of music. As the article states, “By the time the 1800s rolled around, music was a full-blown pathogen.” Physicians of yore warned that music was especially risky for women because of their supposedly fragile nerves: “The fairer sex had weak nerves and were prone to fainting. They also warned that excessive keyboard playing could aggravate such issues. Gynecologists thought music might be too sexy for women or that it could lead to heavy menstrual cycles. On the flop side, others linked it to infertility and reproductive problems.” Of course, in those long-ago days, doctors often made flawed judgment calls. For instance, it was believed that a woman’s womb could wander throughout her body, spreading disease in its wake, and that epilepsy and mental illnesses were “demonic possessions.” Seen in this context, is it any wonder that music was regarded as evil?

Today we know of just one potential danger: hearing loss resulting from prolonged exposure to very loud music. As for everything else mentioned above, all these warnings, myths, and pseudo-science are downright hilarious! Far from inflicting diseases and other medical conditions, music is actually a health booster, both physically and mentally: it can lower our blood pressure, relieve pain, reduce stress and anxiety, and lift our spirits. In other words, there is no doubt (and plenty of scientific evidence) that music improves our lives in countless ways. Who are you going to believe: modern science or old superstitions?

Fit as a fiddle

If anyone witnesses first-hand the true advantages of music training, it is our teachers. They have yet to see any students – young or older, male or female – whose brain was “infected” by music (though they have seen lots of students become “infectious” – spreading the love of music to others)! All this is to say that when a teacher comes to your Manhattan, Brooklyn, or Riverdale home or office, you need not fear any health consequences. You or your child will learn to play the guitar, piano, or any other instrument in total safety. We are happy that, at least in this case, history doesn’t repeat itself!